THE CHEF WITH THE MIDAS TOUCH

FROM AMBANIS TO THE BACHCHANS, CHEF SABY SHARES ANECDOTES FROM HIS THREE DECADE LONG CAREER IN THE FOOD INDUSTRY 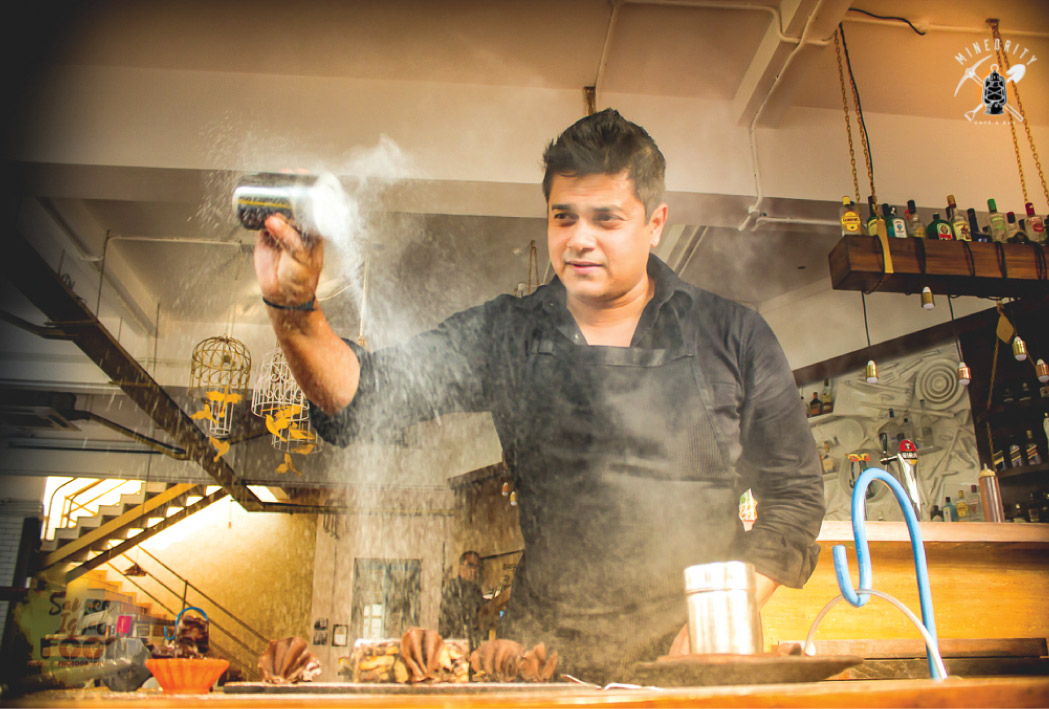 Saby, who has a cult following in the culinary world, hails from West Bengal – Asansol. As the President of the Young Chefs’ Forum of the Indian Federation of Culinary Associations (IFCA), the dynamic Chef also happens to be the youngest Indian Chef to don the hat of a Corporate Chef while at Olive Bar and Restaurants. Armed with the knowledge that he has gathered over the years, Saby is almost an institution in himself.

Chef finds reminiscent of his contribution to the profession, though his biggest reward comes from “cooking for a fellow human being.” Incidentally, he has wowed the likes of the Ambanis and the Bachchans with his culinary skills.

A philanthropist, an educator and mentor to young Chefs, this dynamic Chef-entrepreneur is the founder member of prominent Indian Chef’s associations –IFCA, WICA (West India), SICA (South India) – and is also a member of and mentor in the Indian Culinary Federation (ICF).

Promoting sustainable food and slow food brings him on the global Slow Food alliance – Craft Chef’s Guild. He was featured prominently in Fat ya Fit Chef (CNN-IBN), a culinary judge on MasterChef India, among others and has wowed audiences with his new age cookery show – The Urban Cook (Zee Khanna Khazana, which is now Living Foodz). The award-winning culinary professional was decorated by the President of India with the Best Chef Award 2012– one among the numerous accolades for this academic topper from the prestigious Institute of Hotel Management, Kolkata. He has also won the Golden Hat 2018- Chef Awards Indian Culinary Forum (The Leela, New Delhi), Silver Hat 2014 – Chef Awards, Indian Culinary Forum 2014 (The Ashok, New Delhi), Culinary Leadership Award 2017 – International Chefs Conclave, IFCA (Pullman, Delhi), Best Chef of India 2010 – Varli Awards (New York), Best Mentor to young Chef 2019 – Ifca all India Chef’s Congress, Organic Chef of the year 2019-by Eazy diner (by Vir Sanghvi) and more.

Every restaurant that he has headed or launched and set up has been awarded at all the food awards in this country. He has also been trusted with the responsibility of being the President of the Young Chefs Forum, under WACS (Worlds Association of Chefs Societies), to groom the budding chefs. Through Fabrica by Chef Saby – his restaurant solutions venture – he has curated some of the most-talked about restaurant brands now running successfully across the length and breadth of the country.

With a long list of such acclaimed brands established by Chef Saby post Olive, including Sodabottle Openerwala, Olive Bistro, The Wine Company, The Beer Café, Amreli among others, Chef Saby constantly endeavours to innovate and create unique dining concepts and destinations to cater to epicureans in the country. His current portfolio of restaurants include Lavaash by Saby, Mineority by Saby, Byg Brewski, Bob’s Bar, Gylt – Lounge bar and Club and Poppins. He has also endorsed some of the finest food products and brands from across the globe.

He led the most prestigious and largest 3-day catering event held in India at Formula 1 Grand Prix 2011 at Budhh International Circuit. He, as a part of the Indian chef’s delegation under the guidance of Chef Manjit Singh Gill, in the Bidvest world chef’s tour against hunger, South Africa in 2011 traveled to various cities raising awareness about hunger issues and cooked for the fundraiser.

Saby dreams of a hunger-free world, and constantly works towards striving for food safety in India for a sustainable, cleaner, and greener future for the next generation.

1. When and how did you decide you wanted to enter the food industry?
A. I went to the IHM with little intention of joining kitchens in 1991. During the college, I really enjoyed spending time in staff canteen and cooking for the fellow mates. However, after my training in 1994, I was certain and enthusiastic to take culinary as my profession. It has been the inner calling since then.

2. How long has it been and how has the journey been?
A. It’s been almost three decades. Journey has been everything but tiring. Cooking has taught me how to live life. I’m grateful for the abundance.

3. What were the challenges and how did you overcome them?
A. Challanges come and go. Important was to never give up. I would look at myself in the mirror and tell him- You’ve got this!

5. What are the places/brands you own and consult at?
A. The place which remains closest to my heart is Lavaash by. I’ve been a part of places like Byg Brewsky, Bob’s Bar, The Wine Company, Mineority by Saby, Soda Bottle Opener wala, etc. Currently, I’m consulting with Traveller’s Bungalow, Red Rhino, Hammered, Dank and Max hospitals.

6. How do you keep innovating and reinventing every time? Which are the countries you have travelled to and drawn inspirations from?
A. Innovation is nothing but what hasn’t been done before. I listen to my heart and do what I’m most drawn to. Cooking and serving food and making people smile is one of the most satisfying feeling this profession has given me. That keeps me motivated – to serve.

Coming to the third part of the question, apart from India, I’ve travelled to parts of Europe, including the Eastern Europe, The states, Asian islands and spent few years in Australia as well. My travels have always inspired me in one way or the other.

7. What are the latest trends in the food industry?
A. One of the latest trends which I absolute love is the initiative cooks and chefs are taking to promote regional food and the local ingredients. Customer wants to know the origin of the food they’re eating and I like how mindfulness about eating is actually pushing us to get greener and cleaner.

9. Any advice to the budding chefs? Where do you think the industry is heading now?
A. Post covid, youngsters have got restless. My advice to all the young chefs would be to be consistent, patient and let the seed grow naturally. Don’t believe everything on internet; books are still your best friends. I feel industry is booming currently.

We are seeing the next generation taking over the food world, as a result of which there is no limit to the possibilities and opportunities.

10. What has your work been like in the south of India and where all have you worked at in South India?
A. I’ve spent some time in Munnar, Chennai, Hyderabad and of course a lot of time (laughs) in Bangalore. South has always been more welcoming and there is so much potential in terms of food, culture and business.

11. Something about the south Indian cuisine you like and have incorporated in your various dishes nationally and internationally?
A. I love how simple yet so vast the Southern food is. I have drawn inspiration from Thalassery cuisine to Nati style food to the home food of Gouda’s. You’ll see lot of them in Bob’s Bar. My favorite would be Ragi mudde with saaru.

12. Which is your personal
favourite dish?
Which is your most popular dish that people go gaga about?
A. I love all types of khichdi, especially the ones made with millet. From a lot of dishes I’ve cooked for friends and family, they seem to talk about the chicken stew and paella the most.

13. How do you balance personal and work life with your hectic schedules?
A. I celebrate while working. And schedule gets hectic only when I think of it as work.

14. Who are some of the celebrities who have dined with you and anything they said about your food?
A. I’ve cooked for Bacchan family, The Ambanis, Goenkas, The Mittals, and some top notch sports star during F1 catering including Lady Gaga. I hope they liked my food.

15. What are your future plans?
A. Who knows about the future?
I like to enjoy the present and go with the flow. Like always, will keep cooking and creating something new.