HERE IS A LEGENDARY PLAY AND A FILM IN MARATHI THAT HAS A CULT STATUS OF SORTS, WHICH, PRAKASH RAJ DREAMS TO REMAKE FOR SOUTH AUDIENCE. KRISHNA VAMSI HOLDS THE REINS FOR THIS PRESTIGIOUS PROJECT ‘RANGA MAARTHAANDA’ 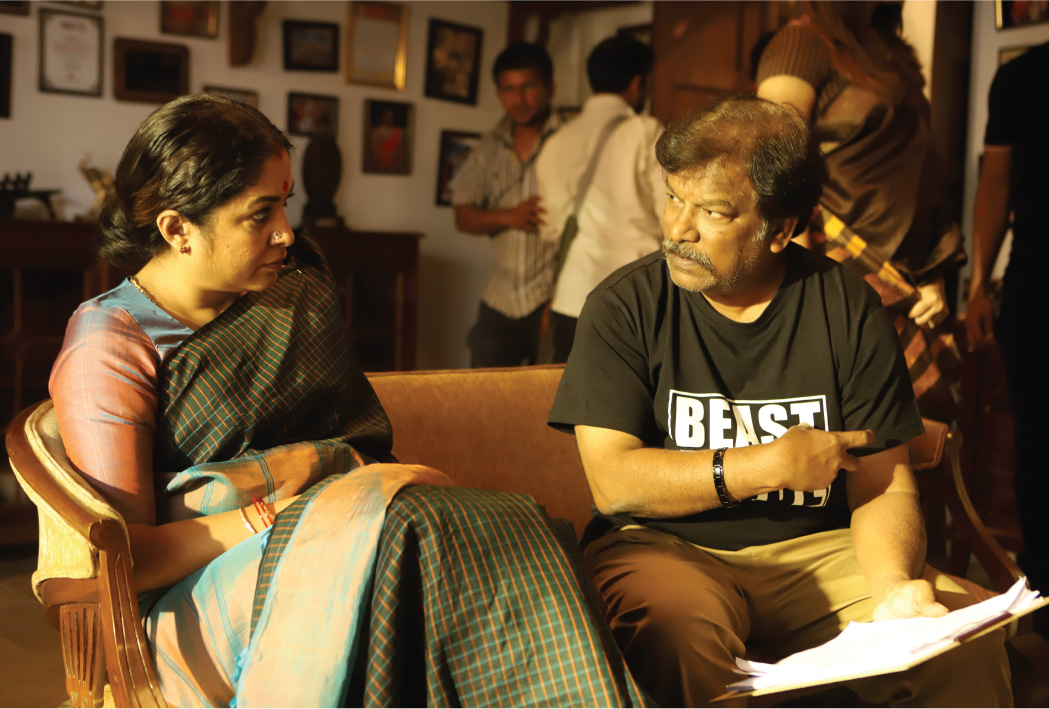 ‘Natasamrat’ the legendary Marathi play, which was also made into an award-winning film with Nana Patekar in the lead is now getting a south touch. Prakash Raj bought the rights for the film by Mahesh Manjrekar. Director Krishna Vamsi has adapted the play to suit the times and sensibilities of the south audience for his next ambitious project ‘Ranga Marthanda’. In addition to roping in Ramya Krishna and Brahmanandam in a casting coup of sorts, he has actors Aadarsh Balakrishna, Vamsee Changanti, Anasuya Bharadwaj, Ramya Krishna, Ali Reza, Shivathmika, Rahul Sipliganj as part of the team.

The Original Natasamrat
Natasamrat is a legendary Marathi Play, which for a very long time enjoyed success on stage but many feared to bring it on to the stage until Nana Patekar finally agreed to do it. This is about an ageing Marathi stage actor written by award winning playwright Kastubha Vyas loosely based on Shakespeare’s ‘King Lear’. Sriram Lagoo for a long time played the central character in the play. Actors like Paresh Rawal, Nana Patekar, Naseeruddin Shah and even Amitabh were approached to make it into a film, but none dared. Playwright Mahesh Manjrekar finally convinced Nana Patekar, who had to agree and the film went on to gain cult status.

The Adaptation
When Prakash bought the rights of the Marathi original, he, as a friend asked me to watch and say if we can do something. It was around the time, I wanted to do a youthful film like ‘Rang De Basathiwas a very slow movie with subtitles. By the time I finished watching the film, I had tears in my eyes, I got connected, And I told Prakash this film has to be made. And offered any help he needs. He then asked me to direct the film – You know me well, and you will deal with me well, and bring out the emotional drama – he said.

Even though it is adapted from the Marathi play, I wrote the whole thing like a fresh subject. There are a lot of changes. I just continued to follow the structure. It is based on present timings, attitudes, traditions and cultures, and about people we see in our daily lives around us, at our homes, and is rooted in our nativity.

Prakash Raj
Prakash Raj and I bond well. We have been friends for long. I am not an actor and he is not the director. I can never act, and he cannot live without the camera. He is a performer. We have known each other for 25 years personally and professionally. He knows how I work and I know his eccentricities and his capacity as an actor. He trusts me and hence listens to me. If I pause for a second he will understand I need one more take. We also discuss elaborately, he listens to my concept, asks questions and gives his views. If I am convinced, I accept or I don’t. And, so, we never had creative differences.

In all these years there is some maturity that has come in both of us. Both of us are eccentric, hence that is not problem. It’s brilliant the way he understands a shot. There is a scene in the original play where there is a lot of dialogue, and I removed it and asked him to stay silent instead – the character has to say something but remains silent. Prakash understood my concept delivered it perfectly. There is a synergy between us.

Brahmanandam
I have known him and watched him perform from the time I was an Assistant Director for ‘Kshanan Kshanam’. I used to look after his costumes, production, food; I used to move closely with him when I understood that he is a literary giant. He studied MA Telugu and was a lecturer, and can speak with authority on many topics.

When I was looking for someone to act as Prakash Raj’s good friend, and critic – I could only think of Brahmanandam Garu. He is an educationist, thinker, philosopher, drawing artist, cook – he is multitalented. If he begins to talk beyond regular talk – he can talk about Vyasudu, Nannanyya, SreenadhaKavi, Pothana, Annamacharya, Purans, Kavyas – while reciting many poems with practiced ease, and explaining them as well.

He is what I call – Karana Janmudu. Born in a normal family with 11 -12 children. How did his father think of naming him thus? Did he know that in future this man would entertain millions and given them happiness? Today, you can only think of him with a good feeling and a smile on the face. He has led a comprehensive life who has seen it all.

There are some extraordinary scenes between both where he gets to display many shades and has to stand against Prakash Raj and almost compete with him. And, I could only think of him in the character, which will showcase his many shades and explore the actor in him.

When I asked him, he did not even listen to the character and agreed to do the film. There are two crucial scenes in the film for which, he did not eat lunch on two days. He said he needed that fire in the belly. When I look at him after working in hundreds of films, and Padmasri awardee notwithstanding, the dedication with which he works is shocking to say the least.

Ramya Krishnan
When I was looking for an actor to play Prakash’s wife in the film, Ramya would suggest a bunch of senior actors, who could be considered. And amidst this discussion I wondered how it would be to ask her to play the role, but wondered if I could deal with her conditions.

Prakash asked me frankly why I was avoiding her. By now she was doing fiery characters, and entertaining roles, and I was not sure if she would agree to play this character.

Here, she will not have heavy dialogues. Her silence is going to be there, which is going to be her power. I said to her – I know you can do, but are you willing to do it. I realized that she is also in the mindset to do a good role, different character with impact, but she had her terms. She was not ready to work early, or one week at a stretch, she wouldn’t work in the nights etc., She felt she earned it all after all these years of working. However, once on the sets she was the most professional and it would be an actor listening to the director.

For the character the eyes should talk, speak and cry, and she needs to deliver the dialogues in soft voice, and in short sentences, but if she speaks there is a purpose. While watching her work, I realised the terrific actress that she is. Her style of approaching a character, her behaviour on sets, her expressing ability, dialogue delivery are all brilliant. Even as the fussy director I am I couldn’t ask for a second take; she would get it all right in the first take itself.

Film Making in The Time of OTT & Impact of Covid
Corona has delayed things for us like for everyone else. However, more time is not equal to a good product. For ‘Ninne Peeladutha’ I took four to five hours. For ‘Sindhuram’ I took one and half years in order to take proper decisions, answer my doubts like – Can I execute this on screen, will the audience accept as it was a topical film.

For me cinema hasn’t changed. The places you are watching have become different. Multiplexes, TVs and even phones. It is the same hero, villain and problems. But I feel the films used to be made with leisure and calmness. I feel now a days they are made in a hurry.