“AGE IS JUST A NUMBER”

“LOOK AT MY WORK, DON’T JUDGE ME BY MY AGE” SAYS THE YOUNG AND CHARISMATIC KRITHI SHETTY IN AN EXCLUSIVE INTERVIEW FOR PROVOKE LIFESTYLE MAGAZINE

She may be only 18, but that does not belie the body of work that she has been producing. We spoke to Krithi Shetty while she was still wrapping up some work for Macherla Niyojakavargam with Nithiin, and was gearing up for her upcoming films with Surya and Naga Chaitanya. Krithi took out some time post her evening workout for an exclusive candid tête-à-tête with Provoke Lifestyle Magazine and left us even more impressed with her real life persona than what we see on screen.

Glowing post a hard core workout she tells us – ‘I prefer evening workouts after I am done with my shoots.” She laughs adding, “Since I am tired after standing through the day during the shoot I hardly work out for an hour.” An average work day for this stunning star who has received immense love and attention by her fans in the recent past is 5.30am to 6pm. She has been working nonstop and has been seen ruling the charts with back-to-back film releases.

Infact recently, she was working in five to six films at the same time, and she confesses to be enjoying every bit of it. “I was enjoying so much that I didn’t realise that my body was tired. After ‘Bangarraju’ – I had two weeks of rest, which was when I realised my body needed that rest.”

Here are excerpts from an exclusive interview with Krithi Shetty:
How do you choose your films?
I am quite picky with projects. My mom and I always make the decision together, even though I prioritise her decision over anything else. I know she will pick the best for me. If I like the subject of the film, and I like my role, I get excited and immediately I get to work.

When you signed for your first film ‘Uppena’ did you foresee what you have in store after the film?
While working for ‘Uppena’, I never thought of all these things and didn’t expect anything. I just wanted to work and finish the film and see how it works out. Frankly I didn’t think I will continue to act in films. I felt it was mentally stressful and takes a lot from you physically and it can be very draining. But then the first song released, and, offers started coming in. I received so much warmth, love and affection from the audience that I feel blessed.

But, you also received criticism. How has been the experience so far in the industry?
People go through what they go through. I was criticised for being young. Now, what can I do about it? Some grow while studying and learning in a college. I am also getting so much knowledge here. I am growing here. I am experiencing so many things, not just theoretically but practically as well.

What made you become an actor?
I was a very introverted person. So, my parents pushed me into an acting class. Once in, I started enjoying it. I started working in a lot of ads. I was getting to learn and my confidence improved. I actually went on from being an introvert to becoming a public speaker. I could see myself opening and evolving.

How do you handle social media trolls?
I really don’t have it as bad as some people. The only thing they talked about was my age –It’s not that I am working less hard. It’s sad some people don’t acknowledge it. I like to focus on the positive side. I have my fans, who over shadow all the trolls. They make everything worth – both pros and cons.
People in the industry say you are so young and hardworking. It’s the best thing you get to know a lot and have long innings, they say. Even hero Ram came in early into acting. Nithiin also was quite young. They give me advice on various aspects.

How has it been to be working in Telugu cinema? What have been your experiences with the actors you worked with?
So far it has been good. Recently while on the sets of Macherla, I felt that I was very much loved. There would be a lot of artistes – Rajendra Prasad garu, Vennela Kishore, Indraja garu, Murali Sharma garu – I was the youngest. They would pamper me, share their experiences – it was wonderful.

Until now the experience of working in Telugu cinema has been warm. I will always be thankful to the industry. My journey in the film world started because of Tollywood and I will always be grateful.

These days promotions are equally stressful. What do you feel about these promotions?
Many of my co actors say they don’t like the promotions and that they are very tiring. But, I feel that when we make something good, it’s important to show to the world how amazing it is. I love the process.

Do share a few things about your co-stars!
Vaishnav Tej – I am thankful I did my first film with him. It didn’t feel like it was his first film. He comes from a film family, but was without any airs. He set the bar for the industry. I expected the worst and he was the best. He was so sweet. I am thankful to him.

Nani – I really like watching his films. There’s a lot as an actor to learn from him. It just gets better and better as you work with him.

Naga Chaitanya – As a person he is inspiring. He is genuine and epitome of niceness. It’s nice to see such good people. I always saw him smiling. If you meet Chaitanya, you will know how calm and composed he is. I felt that even I can be like him. Need to learn a lot from him.

Nithiin – Post Covid, we went for shoot to Milan, while we shot the entire talkie part of Macherla Niyojakavargam in Hyderabad and Vizag.
I am a huge fan of ‘Jayam’ and ‘Raanu Rannu’ song. I was so excited that I get to be in the film where my favourite song is being remade. I made really good friends with Nithiin I used to ask him to bless me (in jest) as he completed 20 years in the industry. He is an expressive dancer, which is a tough thing to do. He never misses expressions while dancing.

Suriya – I think it’s too early to say. Poster and announcement for the film are out, and I am very excited to be working in a Bala sir and Surya sir combination. Fingers crossed.

Ram – Warrior is the first Tamil film I acted in. I got to play the simple character of the girl with native touch – I remembered Uppena when I began to work for the film. Ram always used to share his experiences of working from a young age, and said it is a big advantage.

What kind of scenes do you think you can perform better – serious ones or the breezy ones?
I feel I can do better in emotion-filled scenes. I feel I can carry any genuine emotion very well. Even as a person I am sensitive, so I feel it with my heart. I don’t try to hide my emotions.
For bubbliness you need extra amount of energy. Once you get into the role it gets easy, but initially it difficult.

Beyond being an actor, what kind of person are you?
I am a very stay at home person who can sleep for hours. I have always been simple, I guess. When I go back to Mumbai, I like to spend a lot of time with friends as we catch up on, binge watch a lot of OTT and eat a lot too. I love Panipuri and Vadapav. Yet, I always try to eat healthy but there are times I cheat. I feel we must take care of ourselves.
This time, when I go next to Mumbai, I want to watch Ms Marvel with my friends. We have a ritual where we watch our favourite shows together. I am a Marvel and Korean drama fan. I need to also catch up on my sleep.

What’s next?
I really love acting. I love that this is my life. Whatever else comes to me, it is only after acting, which is my priority. So, I don’t miss any other experience. 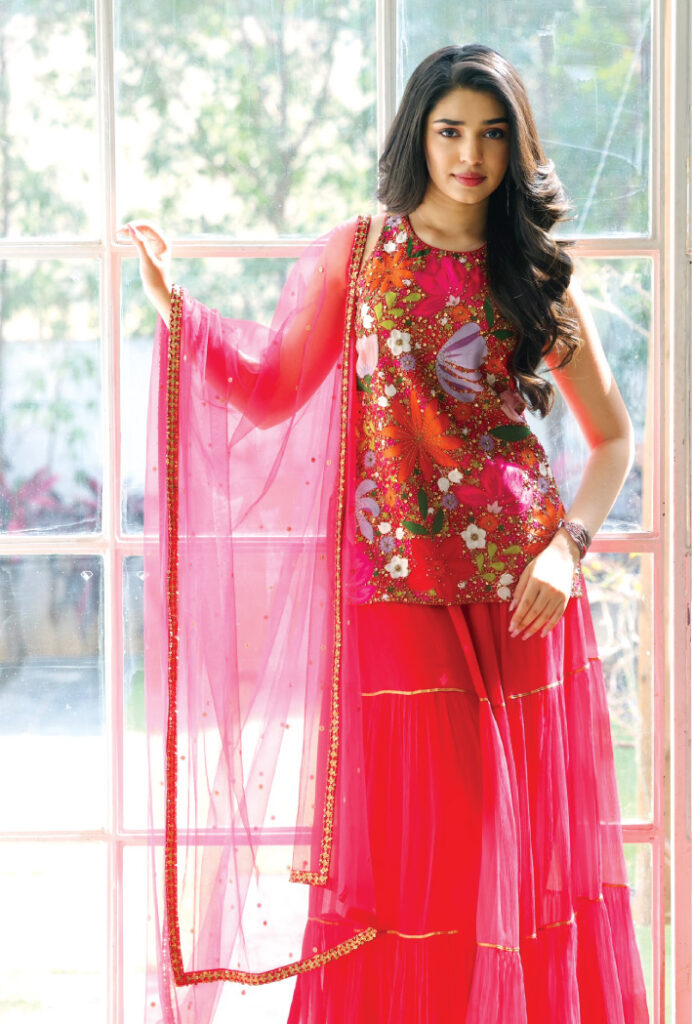 Some essentials that are
always in your bag?