A PINCH OF SALT 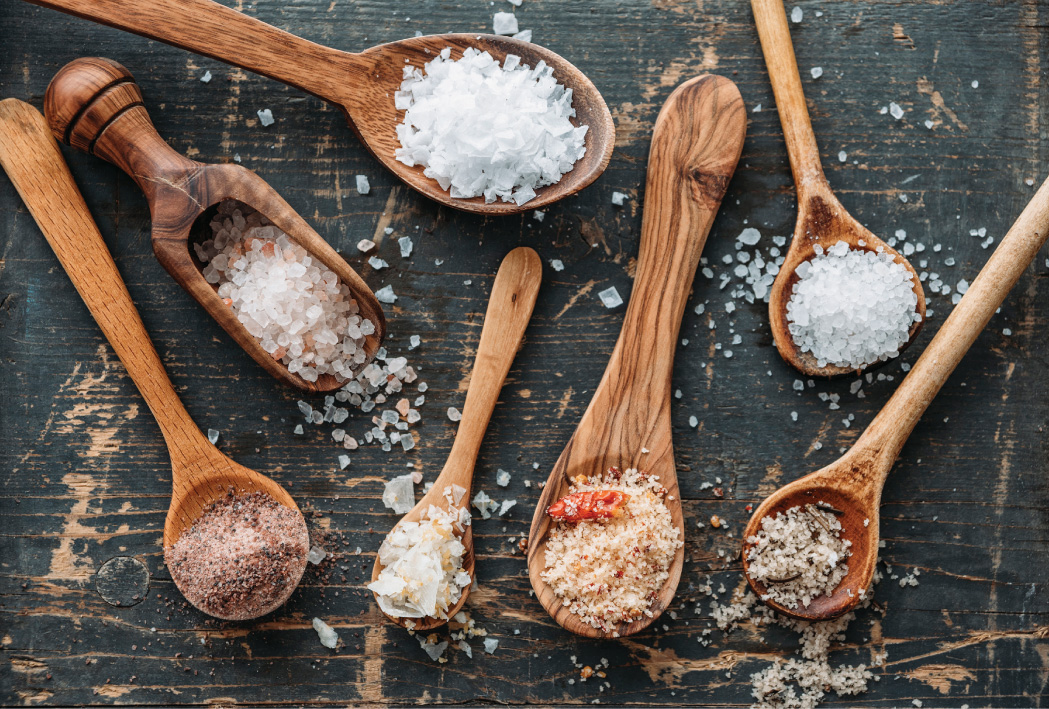 Is Salt the missing ingredient in your health report?
Do you know your great great great grandfather (and grandmother) who pursued a lifestyle of a hunter, didn’t really need to add a pinch of salt to their platter, to enjoy a delicacy? They got their share of salt from the animal meat, hunted and relished. It was only with the onset of agriculture and a change in diet, that they realised, the veggies boiled in salt (or sea water) satiated their pallets that were now accustomed to the salty flavor from the meat.

Ever wondered why the staple food of those living in extreme climatic conditions (hot and cold) was meat or sea food? Not just because the weather or soil was hostile towards agriculture, not just because the fat in the meat helped tolerate the climate…the deeper reason was that, the animal meat, sea weed and sea food are abundant in trace element – Iodine, vital for the health of your thyroid gland – the temperature regulator of your body.

Oh yes…the T3 and T4 in your blood test reports, evaluating the health of your thyroid gland, actually refers to three molecules of iodine and four molecules of iodine. When you are iodine deficient, your thyroid gland cannot do what it should, which is when your T3, T4 and TSH are all off the graph. You begin to feel cold and exhausted when others don’t or you feel lethargic, brain fogged and unenthusiastic to even show up to work, even when your entire career is at stake.

At my clinic in Bangalore, we have had celebrated creative personalities coming in with tears, unable to hold up their creative talent after 30 – 40 years of rejoicing creative stardom. Their blood reports showed their T3 and T4 completely off the charts despite being on Thyroid medication for a long time. In fact, some of them, who have been on the meds for a while, although felt good initially, the feeling wore off over time.

Helen (let’s call her that), the creative head at an advertising agency, had to have her right brain wired up at all times. 12-14 hours long work days in air-conditioned cabin was her daily normal. After eight years of this routine, she suddenly began complaining that she was unable to think because the centralised office air-conditioner was just too cold and her brain was fogging up. Her boss urged her to get a health checkup done (he thought she was burning out and going crazy). She was diagnosed of hypothyroidism and was on 25mg of thyroxin daily for nearly two years. Initially she felt good but over a period of time the sluggishness began to creep in, she was literally dragging herself to work every day. 25mg was increased to 50mg…it would do her good for a while and then she was back to square one. She felt dull and depressed and could barely deliver…let alone be productive. Helen was now on 50mg of thyroxin and anti-depressants. While she had all the classic symptoms of hypothyroidism: poor eyebrow growth and puffiness under her eyes…and some slow reflexes too, the thyroid supplementation wasn’t bailing her out. She said she was feeling much better but she still wasn’t feeling the perkiness she used to feel.

In functional medicine, we see read every cell at a molecular level. If it was the thyroid hormone then let’s look at it on a molecular level – T3 & T4 – 3 and 4 molecules of iodine! Helen was asked to undergo an Iodine Loading test.

What’s that? You take 50mg of a combination of Iodine-Iodide and your urine is assessed over a period of 24 hours. If you have healthy levels of iodine in your body, then you will excrete almost 90% of the 50mg (45mg) consumed. Levels below 45mg indicates deficiency.

What could’ve caused the deficiency?
Diets that lack sea food or sea vegetables or even a vegan or vegetarian diet where the soil used to grow the vegetables is deficient in iodine. Exposure to toxic halides – Bromide (found in many bakery products, pesticides, computers, furniture, clothing and even bedding), Fluoride (in many toothpastes) and Chlorine (needless to say…primarily water and pesticides among a many other sources).

What about salt then? Unless medically warned to avoid, I have not met anybody who would voluntarily consume food without salt. A few of my clients at the detox center have expressed the benefits of consuming iodised salt. Here is a very important question to ask: if you consume iodised salt are you actually supplementing your body with the required iodine?

In 1969 they conducted a study…two groups of people, one group consumed measured amount of iodised salt while the other group consumed bread baked using the exact same measured amount of iodine (instead of bromide which is currently the norm). The results were fascinating: the group that consumed iodised salt indicated less than 10% of iodine in the serum as opposed to those that consumed bread who had more than the ‘sufficiency’ levels.
Surprised? Here’s why: Iodine is widely added to refined salt. Refined salt is exposed to toxic chemicals to give it that free flowing glorious white colour…in the bargain it is stripped off all its minerals, lifeless and devitalised. Thus, by including refined iodised salt in your daily diet, not only are you not feeding your body the required iodine, you are also subjecting your system to many health challenges that occur due to the toxicity of the refining process. Good advice: switch to unrefined rock salt or Himalayan pink salt. It will do the job with a lot more efficiency and humility.

Many clients at my detox center in Chennai, who have been diagnosed and treated for hypothyroidism have in fact been battling more specific Auto-Immune disorders of the Thyroid Gland like Hashimoto’s and the underlying cause of it all – Iodine Deficiency and Antioxidant Deficiency. An ultrasound scan of the thyroid gland with specific blood work for Anti-TPOs would reveal a lot more than just a TSH, T3 and T4 values.

It’s not just the thyroid; mammary glands and ovaries are also abundant in storage and utilization of iodine. Iodine Deficiency and Antioxidant Deficiency together also contribute significantly to many endocrine related cancers (breast, ovaries, prostrate and thyroid).

Just like there are prerequisites to taking up courses…becoming a mother also has prerequisites and one of it is to ensure iodine sufficiency prior to becoming pregnant. Iodine deficiency in pregnant mothers could affect the brain development of the infant.

If as a kid you were labeled dull, blame the iodine deficiency. Many studies have shown that children who live in iodine deficient zones and also consume iodine deficient food have lower IQ levels. A good place to help a child diagnosed with ADHD would be to investigate their Iodine levels.

Iodine is found in abundance in animal protein, sea food and sea weed. Cruciferous vegetables such as cabbage, broccoli, cauliflower and brussels sprouts are rich in iodine.

Apart from supplementing oneself with iodine it is also important to detox other halides which compete with iodine in the process of absorption in the body. Simply put Bromide, Chloride or Fluoride block the iodine from entering the cells, instead let themselves in…

Here are some simple ways to detox your body:
Hydrate yourself with pure RO water.
Include at least 3-5 sessions of Colon Hydrotherapy for both
colonic hydration and detox.

Undergo Ozone Therapy to enhance oxidation pathway. This will ensure that your T4 becomes T3.

The entire range of T1, T2, T3, T4…is synthesised in the Liver. Instead of actually brewing the hormonal concoction required by the body, the liver of most people (with fatty liver) is burning out, building storage wardrobes for the excess toxic fat in the liver. A periodic liver detox at least once in six months will relieve your liver from the burden of dealing with storing fatty toxins and instead focus on normalising hormonal imbalances.

Another wonderful detox procedure to rid your body off heavy metal toxins is Infrared Therapy.

Ensure high normal Vit B levels. If you are deficient in Vit B there are chances that you will be making good amounts of T4 and converting it to T3…but the T3 never enters your cell. Bummer! Of course, Iodine supplementation: consult a functional medicine doctor to get the right dosage of iodine required based on your body’s sufficiency/deficiency of iodine.
Iodine is necessary, not just for the thyroid gland to function normally, but for every cell in the body. Over a hundred years ago Iodine was in fact prescribed as a ‘universal medicine’.

Albert Szent-Györgyi, a Nobel laureate who discovered Vit C once said, “When I was a medical student, iodine in the form of KI was the universal medicine. We students used to sum up the situation in this little rhyme:

If ye don’t know where, what, and why

Prescribe ye then K and I