MORE THAN JUST A PRETTY FACE 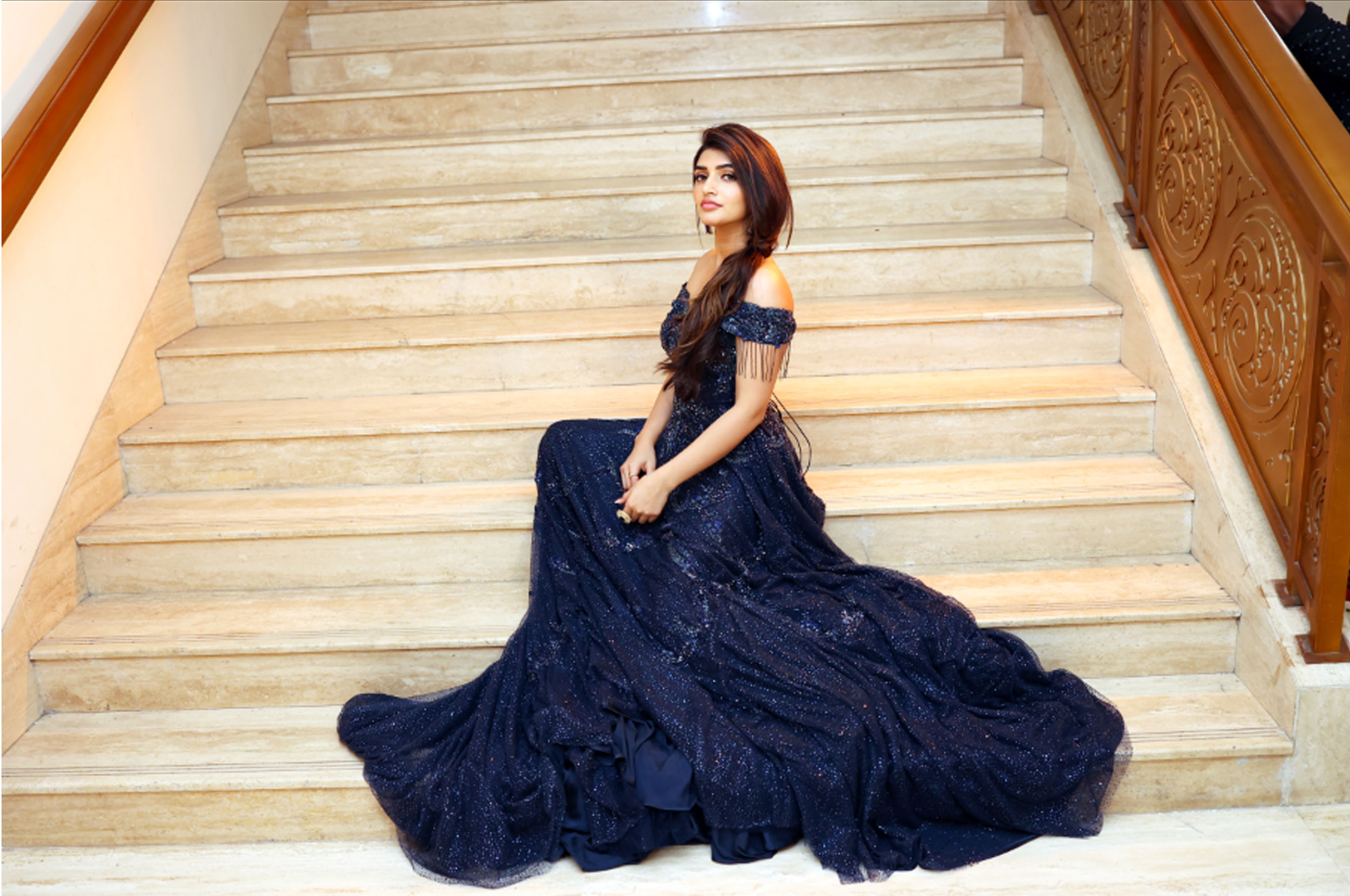 Sree Leela has been a busy bee juggling her medical studies and a thriving career acting in Telugu and Kannada movies. Some of the much awaited movies include Dhamaka directed by Trinathrao Nakkina, Anaganaga Oka Raju directed by Kalyan Shankar, Dubari directed by Nanda Kishore, PVT04 directed by Srikanth N Reddy, besides a whole lot of interesting projects that are being signed up.

1. Where did you study? How did you enter the film industry?
I did most of my schooling in Bangalore and then got into medicine. Getting into the film industry was accidental. I wanted to be a doctor from the beginning but I was also very interested in dance. I would come back and imitate the people I met and certain actors too. I was basically an entertainment source at home and now I’m an entertainment source for a wider audience.

2. Can you recall some of your favourite childhood memories as a Bharatanatyam dancer?

I started dancing when I was three years old. Just when I started walking I was already dancing. I did my arangetram when I was eight years old. My guru was Savita Arun and I loved my childhood as dance was an everyday part of me. Every single day I had to dance and it was a way to express myself. As a kid I went to various places around Karnataka and Andhra for my performances. Most of my performances were in temples and mutts.

3. You share a special bond with your mother. Tell us more?
We share a very special bond like most mothers and daughters, but what’s different here is that I do not have a lot of friends so I’m not surrounded by too many people. I don’t have the energy to invest in too many random people, so my mom is my best friend. She keeps switching roles – she goes from my mother to best friend to confidante, depending on our moods. Whenever we have each other we don’t need anyone else. We can stay by ourselves and be happy. Whenever I travel to other countries for shoots, she’s always with me. We giggle and laugh and have such a good time. When we are in the same room, someone should make a TV show of what happens between us – right from her yelling at me for not setting my clothes properly to being really caring and being there for me at every step. We have various scenes that happen at home every single day. Anyone who has met us tells us we are inseparable – one second we screaming at each other and the other second we are cuddling and hugging each other and I’m sleeping on her lap.

4. Do share some special moments and experiences from the Pelli Sandad film shoot?
Pelli Sandad was one of the most beautiful films. My character and my team was amazing. Shooting with Raghavendra Rao garu was a pleasure. I was someone who grew up watching his songs, so working with him was very special for me. He also wrote a book and to be a part of that book was also really special. My co actor Roshan and I shared a great chemistry on screen. Our songs also did so well. There was a lot of space for an artist to prove herself in her first film. One usually doesn’t have that in their initial stages. There were many shades I got to portray as an artist – good dance numbers to display what I have and what I can do.

5. What course are you pursuing and where? How do you balance both the worlds?
I’m doing my MBBS and it is really crazy to handle two different lives. It keeps me sane as too much of anything can get to your head. When I get tired of one, I switch my profession, so that way I can enjoy the best of both worlds. My family and friends are very kind and accommodating. They understand my schedule and accordingly come to where I am if they want to meet me. The other day for my birthday, my friends surprised me and my mom planned it all. My mom always makes sure even if I’m busy, I don’t miss out on these special days in my life.

6. Tell us about your two adopted children Guru and Shobhitha and the bond you share with them? At an age when people want to have fun why did you want to take an added responsibility?
It wasn’t planned. It was a spontaneous emotion and feeling for me. I was shooting for my Kannada film called By Two Love and when I was shooting for it, my team surprised and took me to a place where there are all these kids waiting for good families. There were so many kids with certain issues as their parents had left them and they needed a home. Any human being will melt at such a sight and feel that emotion for them. It was an impulse to take care of them and I gave in. This is just the beginning and I have big plans for them. I love them and I FaceTime with them. They are my friends and they motivate me to do better in life. I know that they are now my responsibility so now I want to do more work to keep them happy.

7. What does social media mean to you? Any crazy fan comments you liked recently? Do you handle your social media yourself?
It’s a great platform and one door to reach millions of people. I feel like I belong to the older generation because although I like interacting with people face to face, so I have to push myself to be on social media as it’s very important. I’m beginning to like it now as I can keep in touch with my followers who like to see what I’m doing day to day. I believe if someone is investing their time to read my interview or going to my Instagram then I should have some impact on them. Either I should make them laugh or give out some message when I speak. Now I’ve actually become a social media bug and reply to all the comments and messages. I don’t think too much now before putting something up as I want to be real. I handle my social media myself. I’ve come across many crazy comments. There’s always someone coming up with some cheesy pick-up lines and all of that. I’m a very shy person but it’s their way of expressing love and sometimes it’s cute.

8. From winning an award for the best debut film in Kannada in 2018 till now, how has the journey been?
It’s been a wonderful journey so far. My first award for my first film in Kannada titled Kiss was very special to me. There was one thing I said that day – There’s a lot more to come. I entered this field thinking I’m testing waters but once I got in I knew I was born for this.

9. Also recall some of your experiences growing up in Bangalore and then later in the US?
I was born in the US and then later lived in Bangalore. I was always into sports and dance and music classes. I would go to my aunts and tell them – see my Mumma has kept me so busy while all my friends are playing in the park and I’m here. I was always a preoccupied kid who had lots to do always. But it was good as all those skills and classes – horse riding, dance, Veena, skating, hockey, swimming etc always kept me busy and because of having that kind of a busy schedule as a kid, I’m able to cope up with a hectic schedule even today.

10. Since it’s the Indian Independence month of August. What does being an Indian mean to you?
India is known for its culture. Every time we talk about India it’s about our rich history and culture. In today’s generation where everyone is trying to inculcate the western culture, people outside India are trying to imbibe our India culture – like doing yoga and eating ghee or our home made food habits. We should be proud of our culture and stay rooted.

11. Your views on love and marriage?
Love is important and with marriage one enters a different stage in life. It is important too but it should be with the right person at the right time. One must not rush into it. I feel love should not be so confined to only from a partner – it can be from anyone you’re close to – kids or your guru or anyone you’re close to. At my age I get it from my mother, from Shobhitha, little kids, pets and when the right time comes, probably from the right guy. Right now my cup is full with all these fans, friends and family giving me so much love.

12. How comfortable are you with Kannada, Tamil, Telugu and Malayalam? Which language are you most fluent in?
I can speak Tamil, Telugu, Kannada and can manage Malayalam. I’m most fluent in Kannada and Telugu and Tamil is such a sweet language. I have a knack of picking up languages very fast. Later in life I would like to travel a lot and learn a
lot of foreign languages too.

13. Please share some recent fun experiences while shooting for James and Dhamaka.
Dhamaka was such a blast and every moment was super exciting. The team was wonderful and it will be special as it was my second film. My character is also very nice. It’s a film that I actually signed up before my first film released in Telugu. It’s with Ravi Teja garu and we have almost wrapped up the shoot. We are at the fag end of it with just about four days left. The song I appeared for in James, which was a tribute to Appu Sir (Puneeth Rajkumar) was a great feeling as it was a great responsibility towards the Kannada film industry. I was lucky to be given that opportunity.

14. What are the current projects you’re working on in Telugu and Kannada? Also what’s in the pipeline for the future?
My next release is Dhamaka directed by Trinathrao Nakkina. Then I have another film titled Macherla Niyikakavargam with Nithin garu (Tollywood actor). There’s another film with Anil Ravipudi and Nandamuri Balakrishna. I also have a film coming up with Kireety Reddy in his debut film and the project is headed by Radhakrishna. Our launch event for this film was graced by Rajamouli Sir. There are many more being signed up and many more updates to come soon. It will be a very busy time for me and I can’t be more excited. 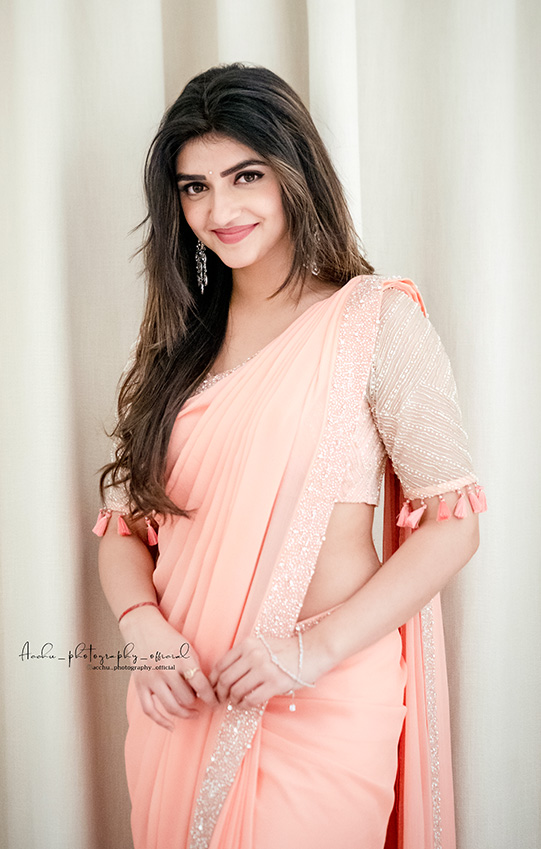 7. Your celebrity crush?
No one really.

9. Your ideal man should have these qualities…?
Patient, understanding and funny.

10. Your favourite holiday destination?
I love to travel to new destinations every time.