A MÉLANGE OF BIG, BOLD AND FRESH GLOBAL FLAVOURS 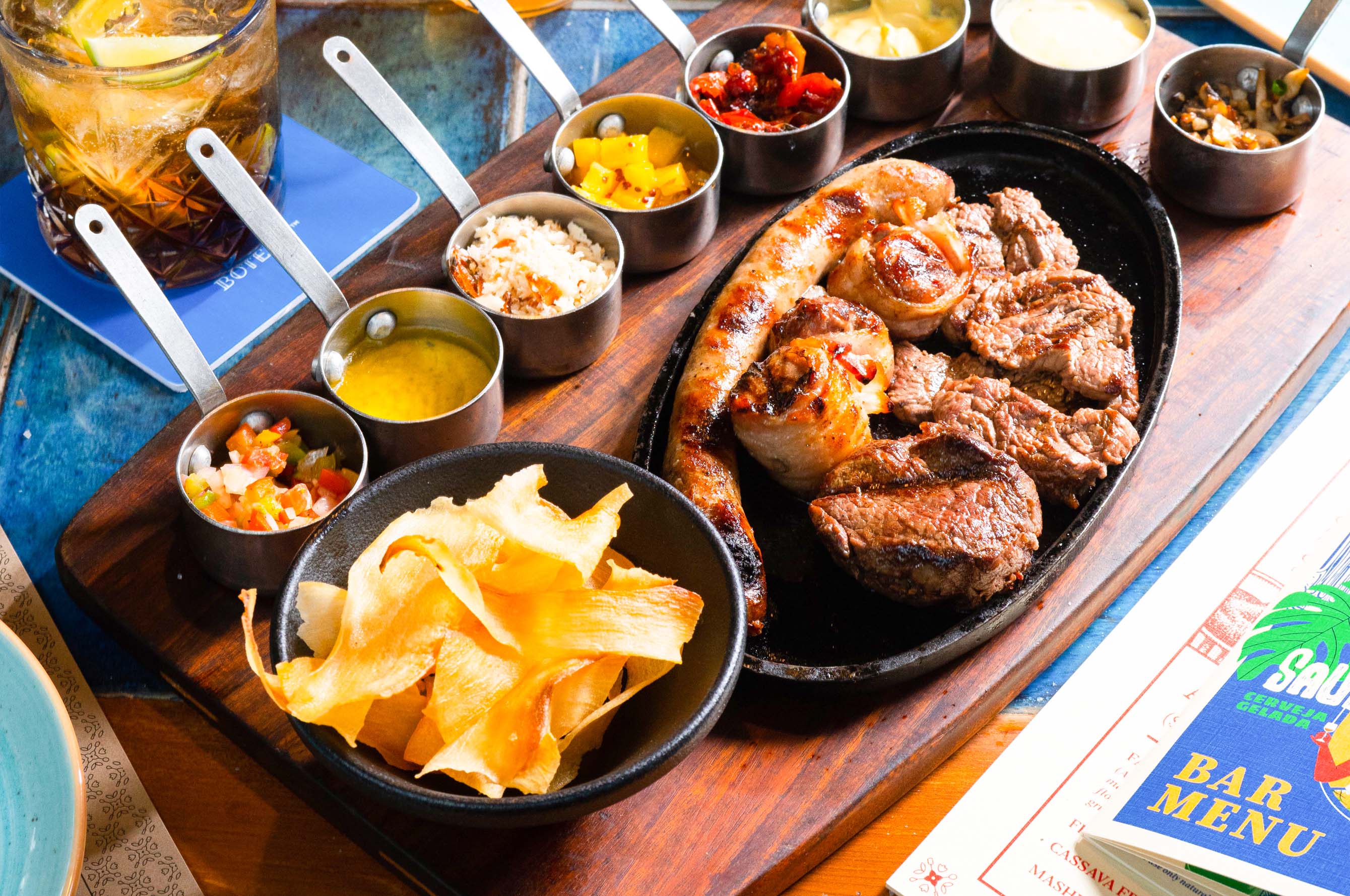 Save a trip to Brazil as Boteco – Restaurante Brasileiro comes to Bangalore. Brazilian food is an interesting mix of influences from around the world (indigenous, Portuguese, Italian, Arab and, even, Japanese). Talking about a single Brazilian cuisine, despite some nationwide commonalities, would not do the vast array of food and flavours justice. Indulging in Brazilian cuisine is almost like half a trip around the world, so when Boteco opened doors in the city, we decided to feast on the many flavours, the cuisine is known for. ‘Botecos,’ are traditionally neighbourhood bars that one can find in street corners in Brazil and translates in Portuguese to a place for great drinks and easy conversation.

From quick bites like Coxinhas and Entradas and Linguiça com Mandiocas, this first-of-its-kind restaurant and bar in the city promises to introduce Bangaloreans to the vibrant and diverse cuisine of Brazil.

Ambience: Designed by Bangalore-based architect George Attokaran (Atto Atelier), Boteco-Restaurante Brasileiro is inspired by the neighbourhood watering holes of Brazil. Two storeys of Boteco spread over 100 seats, brings to Bengaluru, the warmth and vibrancy of Brazil. One is drawn in right from the street by an expansive glass mosaic mural that captures the essence of Brazil. Brazilian icons like the bossa nova player, the toucan, the Brazilian flag and the carnival lady are quilted together in an explosion of colour. The spirit of Brazil extends further into the interior aesthetics of the space through a constellation of wall art, each capturing a snippet of Brazilian life, culminating in the central double height mural. The internal spatial design of Boteco-Restaurante Brasileiro draws inspiration from the arches at Lapa and the vibrant sidewalks of Copacabana, designed by the famous landscape architect Roberto Burle Marx. The ceramic tile patterns on the floor and walls further emphasize a romance with colour – typical of the tropical paradise that is Brazil. The space is imagined as an evolving tapestry of all things authentically Brazil, including the black and white photo wall, that pays homage the greats of Brazil and Brazilian architecture. As one weaves in and out of the Lapa-inspired arches, one is bound to catch a glimpse of one of the two private cosy nooks at Boteco. Amazonian forest-inspired wallpaper, delicate handmade cane lights and a rich landscape of large-leafed tropical plants, delicately poised inside handmade jute baskets bring home a quintessentially Brazilian vibe.

Food: Coxinha (pronounced co-sheen-ya), is just one of the many fritters Brazilians adore. What samosa is to India, Coxinha is to Brazil! Let’s not forget about Cassava! Tapioca is the key contribution of indigenous Brazilians to the national cuisine and is one of the most versatile ingredients. It is fried, boiled and even used as a base for fish stews, cakes, etc. Ask your server for that extra serving of cassava chips or farofa to go with your drinks.

Did you know that Brazilians are not generally used to eating spicy food? For most Brazilians, spice is an acquired taste! The menu here captures this very spirit with a selection of authentic as well as reimagined dishes. Add to the complex range of food from Brazil, Executive Chef Guto Souza’s creative interpretation of a variety of influences from his travels and culinary experiments.

Start with some delicious cheese breads, Pão de Queijo (pronounced pown-deh-kay-zho). A popular Brazilian snack, these heavenly Pãos are made from tapioca flour and cheese, making them naturally gluten-free! A versatile snack that goes well with your coffee, cocktail or beer. One bite of these cheese breads and you will know just what the obsession is about. Big on Seafood? With over 7,000 kms of coastline, it’s only natural that Peixe (fish), Camarão (prawns) and various types of seafood play an important role in Brazil’s cuisine. Feijoada (pronounced fey-zhoo-ah-dah), was the substantial meal that enslaved people ate to get through their day. It’s ironic, that it went on to become Brazil’s national dish. It is typically paired with sautéed collard greens, pork rinds, orange slices and rice

Brazilian cuisine is an exuberant mix of native, European and African influences and varies greatly by region, reflecting the country’s mix of indigenous and immigrant populations. The most distinctive regional cuisines are from the states of Minas Gerais and Bahia. While Minas Gerais cuisine has a strong Portuguese influence, with pork being the preferred meat; Bahian cuisine has more African delicacies. The Brazilian barbecue churrasco originated in the south of Brazil, with beef being the preferred meat, and strong culinary influences from South American countries such as Uruguay and Argentina.
The extensive small plate section offers dishes like Prawn Croquettes – prawn and bechamel croquettes served with red spicy sauce, and Bruschetta De Lunguiça – home-made pork sausages served with French baguettes, Linguica com Mandioca – seasoned pork sausages served with cassava fritas and Camarao Copacabana – prawns tossed in butter garlic and wine and served on a bed of roasted tomatoes.

For plated mains, the menu is divided into three sections – vegetarian, meat and seafood. Starting with the hearty plates of meat, one can find the immensely popular Carne Na Pedra, a DIY dish where thin slices of steak are cooked at the table on a hot stone and served with fries; Farofa made with toasted cassava flour and salad. An exciting and rather unique dining experience to look forward to is the Brazilian barbeque – ‘Churrasqueira’. Drawing inspiration from the Brazilian style of barbeque, Boteco has its own ‘Churrasqueira’ section with a specially designed charcoal grill to cook those meats to perfection. Choose from Tenderloin Steak, Belgian Pork Steak, New Zealand Lamb Picanha or a Mixed Grill. If you want to go big, opt for the Mega Meat Grill Platter to share, or the Brazilian coastal favourite Seafood Platter with grilled fish, prawns, salmon sushi rolls, crab cakes, grilled calamari and crabstick salad. Brazilian food is a community-based cuisine and choosing the Mega Platters of meat or seafood would be a great way to dine with a group. One of the few dishes eaten across the length and breadth of Brazil – Feijoada – a hearty stew of black beans, sausages and varied cuts of pork is believed to have been created by African slaves. And if you enjoy seafood, there is plenty on offer on the menu including Casquinha De Siri – crabmeat sautéed with coconut milk, palm oil, tomatoes, and paprika, topped with cheese and beautifully presented in the shell. There are also two traditional Brazilian fish preparations one must try – Peixe Ao Molho De Camarão – grilled fish fillet topped with prawns in a mildly spiced sauce and Moqueca De Peixe – a spiced fish stew with grilled fish and served with rice.

Although there are extensive meat offerings on the menu, there is a wide selection of vegetarian dishes to keep non-meat eaters satiated. Vegetarians can look forward to dishes like Bolinho De Aipim – deep fried cassava and cheese croquettes served with chilli sauce, and Feijao Amigo, a thick Brazilian traditional soup made with beans, parsley, garlic, bay leaves and fresh cream. Also on offer is the Rocambole de Espinafre – a spinach roll filled with vegetables and cheese, Risotto de Tomate – a risotto with fresh tomato sauce, cherry tomatoes, pesto and roasted almonds and Polenta Cream with Mushroom Ragu & Puff Pastry – a creamy cheese polenta topped with mushroom ragu and puff pastry crowned with a parmesan tuile.

The Portuguese brought to Brazil their love for sweets and baking and this can be experienced on Boteco’s menu. Order the popular Quindim – a Brazilian baked custard with fresh coconut or the internationally renowned Doce De Leite Com Churros – a fried-dough pastry served with chocolate sauce and dulce de leche.

Drinks: The best way to get in to the spirit of things is to sip on Brazil’s national liquor called Cachaça (pronounced kah-shah-sah), distilled from sugarcane alongside and you’ll soon start enjoying the journey. Caipirinha (pronounced ky-pee-ree-nyah), a low-ball cocktail shaken with lime, sugar, and ice, is how most folks drink cachaça. While Caipirinhas are sometimes drunk with meals, Cachaça shots (usually from aged Cachaça) work well both as an apéritif as well as a digestif. Win-win!

Did you also know that Brazil is the world’s third-largest market for beer? They like their ‘Cerveja’ – pronounced cer-ve-ja – extremely cold! A Brazilian can think of a million ways to open a beer bottle, and the first thousand don’t even involve a bottle-opener! A traditional boteco would be nothing without its fair share of heady cocktails and Boteco-Restaurante Brasileiro, Bengaluru offers a wide variety of tipple to keep you in good spirits. These include the Brazilian national drink, the Caipirinha made with imported Brazilian Cachaça (a spicy, sweet, fruity clear liquor distilled from fermented sugarcane juice), lime and sugar. With a selection of traditional and signature cocktails, one will be spoilt for choices at the bar. Recommended cocktails include Cha-Preto, a Cachaça based communal drink and Summer Punch with Cachaça, sugarcane juice, lime, pickle brine and butterfly Pea Tea. Gin lovers can order the Popcorn Gin & Tonic made with cold brew with a splash of tonic water and gin of course.

If you like a dessert and cocktail in one glass, try the Batida De Co Cachaça, a cream coconut and condensed milk concoction, to give you that sweet high. Cachaça plays a large role in the cocktail program here but for those who like to keep it simple, a wide selection of classic cocktails, fruity house sangrias and beer, along with international and domestic spirits are available.

The Team: Boteco – Restaurante Brasileiro is the brainchild of Praveesh Govindan. His work as a mechanical engineer with Coke (in Atlanta, USA) required him to travel extensively to Brazil. He not only fell in love with the country’s beautiful landscapes and beaches but also with its culture and, more importantly, its food. Inspired to open a Brazilian restaurant, Praveesh collaborated with partner Chef Guto Souza, whose extensive restaurant experience in Rio de Janeiro and around the world helped bring shape to Boteco. Internationally renowned chef of Brazilian origin Chef Guto Souza – helms the kitchen at Boteco.