THE NEW FACE OF RAP

THE STORY BEHIND THE RAPPER, SONGWRITER AND ACTOR FROM KERALA, VISHNU MS OR THIRUMALI AS HE IS POPULARLY KNOWN AS

This young boy, who dropped out of college to make music, is now being pitted to break away Malayalam rap from the margins and making it mainstream. Vishnu MS known as Thirumali is a popular rapper, songwriter and actor from Kerala. Not too long ago, Vishnu MS was on the streets of Kottayam, rolling off words that came from a deep space within, searching for an identity. Like most extraordinary rappers, who ever made it big, Thirumali (meaning honesty and greatness) has risen from the suburbs and is now making everyone in the music scene stand up and take notice of his art.

A cornerstone of the Southern heat, Thirumali started rapping at a time when Malayalam rap was almost getting obsolete. ThirumaLi was one of the pioneers who entered the field with a friendship anthem ‘ALIYA’, a Malayalam term used for “Best Friends.” This stellar song, an ode to true friendship was brimming with youthfulness and energetic fervour and soon became a perfect anthem for people who appreciated genuine friendship. The song that was recently released on YouTube has already crossed one million. Let’s hear it from the rapper himself on his music and more.

1. You have been practicing and have mastered the art of music for a while now. Please share with us how the journey started and how you found your calling?
When I was in higher secondary school, I began listening to rap music. I used to listen to Eminem a lot before discovering other musicians like Drake, Kanye West, Kendrick, and many others. That’s where my passion in rap music began. Rap is a very unique form of music, including the beats and the lyrics. The overall energy of rap has been extremely motivating to me, and that’s how I began rapping in Malayalam.

2. What were the hurdles initially? How did you overcome them?
It has been a challenging journey for me. Rap wasn’t very popular in Kerala at the time, or if it was, it wasn’t as popular as it is now. Also, I come from an average household, so I don’t recall of me ever thinking of following my passion or pursuing a career in music, but I eventually did. I believe I was fortunate enough to encounter people who understood music, with whom I collaborated on various songs that were uploaded to YouTube. Some of them became popular on the internet, and it eventually occurred, and I consider myself quite blessed because many artists who came before or after me are still attempting to break into the rap industry, particularly in Malayalam. This genre isn’t supported by large audience or has an industry of its own. But people, on the other hand, were really supportive of me and my music.

3. What have been the highpoints of your musical journey so far?
I believe that better milestones are yet to come, as I’ve only just begun, and hip-hop and rap music in general is developing in our city and country. As a result, I believe the best is yet to come. We’re still working on it; we’re full-time musicians, so I’m hoping for the best.

4. How do you keep innovating in your creative field?
From the 1990s to the present, I listen to a lot of hip-hop music. I’m not bound by any particular era; I enjoy both new and old music. Change is everything, and I’m always interested in what’s going on in the world of rap music. It’s growing exponentially now in India as well, and there are a lot of artists in our industry that I admire. I study their work and am aware of people’s preferences. That’s why I’m always working on getting new music to people and try new ways to do things.

5. How do you ensure that your music resonates with today’s lifestyle and mood?
I believe I make hip-hop music with modern beats with amalgamation of rap and new school sounds. Even if I express issues or mention about things that aren’t on a global or national scale, the fact remains that my music will always be true to global sound. I utilise trap rhythms and different beats, and even if people don’t understand my lyrics, as I rap in Malayalam, they’ll enjoy the song, as you see that happening very often with major international releases. 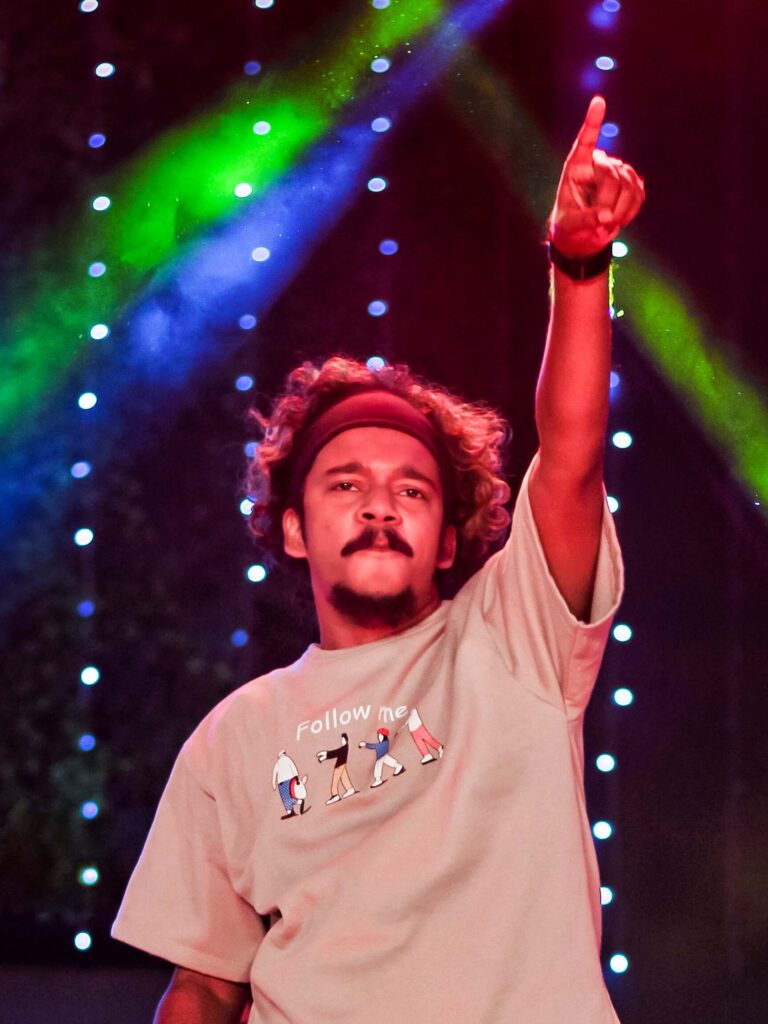 6. How has the time been in the last two years during the pandemic times? How did you evolve in your creative space while being stuck?
For me, the entire pandemic happened in three phases. The first phase went well, and I produced a lot of music at that time; however, the second part was less creative, and I produced very little music. I left feeling like I was stuck in a creative rut in the second phase. And then in the third phase I got signed with Fount Out which is Universal Music India’s enabler platform for hip-hop artist in the country. I am the first Malayali artist to debut on Found Out with my Song Aliya that released on 24th March. So, I can say that the third phase has showered blessings on me, and my hard work seems to be paying off.

7. Some of the places where you have performed at and which ones have been your favourite?
In Kerala, I have played on more than 100 stages, and many of them are my favourites. I’ve performed at serval music festivals colleges, including DM, WIMS, Calicut and many more. It’s not just about which festival for me; it’s about the experience. I love the most when the crowd is buzzing with energy and willing to go wild with me. If the crowd seems to be enjoying, I enjoy myself even more.

8. Would you like to share any interesting incidents that have taken place during your performances? Any collaborations with other popular personalities in your space?
There are many occasions like this, but one that comes to my mind is when I performed at Tagore theatre, which is a music festival called OLAM. I attempted to watch the act from the outside just before the year I performed there, but due to some reasons I was unable to obtain a ticket for that show. But the best part is that right after a year; I was performing for them where I was a featured performer. That was the most significant event of my entire career. And one of the most unforgettable event of my life.

9. Would you like to tell us more about your other passions that people don’t know of?
When it comes to music, I’ve always been into it, no matter what sport or other art I might be pursuing. However, I enjoy movies, music, and I like reading and traveling as well. Nevertheless, music is my lone passion. I love nothing else as much as I love music.

10. Tell us about your friendship anthem Aliya?
‘Aliya’ is one of my best songs I’ve released till date. It has quite a catchy song and instantly gets you grooving. I still listen to that song daily, and it is one of my favourites. I believe that people are enjoying my song because the music and lyrics are quite appealing. It’s my pleasure to release this song with Found Out and it’s for everyone else to celebrate friendship. My fans are the reason for this song and it’s an anthem dedicated for you guys.

11. What are your future plans?
Currently, I am working on several projects. Being signed to Universal Music is a big deal for me, and it is also a great beginning, so I want to make a lot of music known to people who don’t know who I am yet. Getting to the top of the game is my goal with Found Out and I hope to work with them for a long time.