While correcting answer sheets and spending hours in the classroom, Sandhya never imagined in her wildest dreams that she would be a successful farmer one day, selling condiments made from her own produce. But life has never been more peaceful neither has she experienced such positivity from people, says the ex-school teacher. 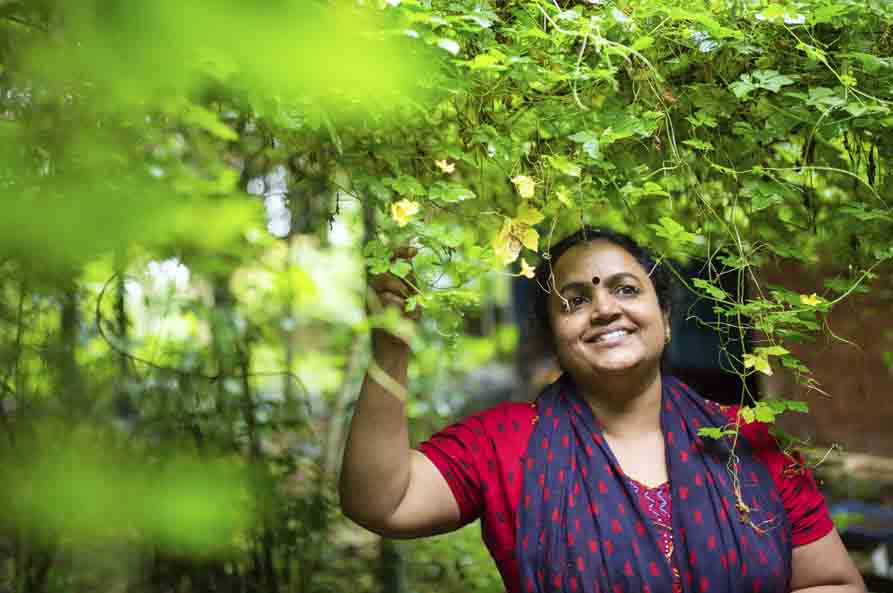 When Sandhya NB left her job as a school teacher, she had 15 years left for retirement but her only one aim was to quit, nothing more. That was in 2015. Fast forward to 2021 and she is now a full-blown gardener, farmer and entrepreneur whose products made from ingredients grown in her own garden are very much in demand.

“I would say I started living after I left my job,” says the farmer-book lover, hastening to add that she wouldn’t recommend anyone blindly following her model. “I couldn’t be happier if someone else gets inspired to turn to organic farming, but it depends entirely on your priorities. It’s not easy, and it takes consistent and immense hard work to do what I’m doing,” she cautions.

For 23 years, Sandhya worked as teacher in a reputed chain of schools, a much-coveted job for the various benefits. But her priorities were different, she says, and at one point, she decided she had had enough. “Once both my sons finished Class 10 from the same school, I was left in a small town where I was on transfer, far from family. The school had only a limited number of students owing to its location. I am a high-energy person, and not having enough work is dreary for me,” she says with a laugh. So one day, to the surprise and shock of her colleagues and family, Sandhya called it quits, and moved to her hometown in Thrissur to join her husband. “I was interested in a lot of things and knew I would do something after resignation, but I didn’t know what. We had a 1.5-acre ancestral property with a few trees but I had zero knowledge about gardening, let alone farming.”

But she casually joined a few farming groups on social media and slowly her interest and knowledge in farming grew, and soon she had a vegetable garden. Right from the beginning, she was sure she wasn’t going to use any kind of pesticides or fertilisers for faster growth and so alongside she reared cows, goats, ducks etc. to practise integrated farming. “It was a blissful time,” she recalls, “I had every kind of vegetable and my days were spent tending to them and the animals. As I wasn’t a fan of pesticides, the yield wasn’t great but I was growing enough for our own needs in the house. I started pickling or powdering whatever was left over, and giving it to people. I also started preparing virgin coconut oil (used for babies).”

The turning point happened when someone appointed her as the admin of a farming group which met every month to sell their produce. “It was an open market and all the items would get sold within hours, which got me thinking; if there is so much demand for homegrown products, why not make it a weekly market? That was the point when I started taking my farm seriously.”

However, if you ask Sandhya what her products are, she wouldn’t have the same answers every time. “I started with various chutney powders and pickles, but they would depend on whatever grows well each season. It could be mango for a few months and nutmeg the next. Virgin coconut oil is the only permanent product I make regularly.”

A speciality of Sandhya’s business is the way she writes every post of hers, describing the process of making each product elaborately from scratch. Before long there would be people asking for it, enthralled. But Sandhya doesn’t think she is doing anything different or extraordinary. “I’m just doing something many others are doing. People want only homegrown products now, from someone they trust,” says Sandhya.

Unsurprisingly, she never had to do any marketing, neither did she open a shop or even a website. “I would say everything happened organically. All I have is my Facebook account. My elder son who is also a photographer clicks photos of the products while my younger son helps with the writing part. During Covid, my husband’s business took a hit and he too joined me. We work as a team now.”

Interestingly, during Covid, her sales only increased and soon the work became too much for her to handle single-handedly. At the same time, a woman in the neighbourhood whose family was struggling to make ends meet asked her if she could employ her. “I took her in and that gave a new direction to my venture. Many of the menfolk have been left jobless during Covid, and it’s the women who are providing for the families, doing odd jobs. If I can expand the scale of my venture, I can employ more of such women, I realised.”

During the Onam season, Sandhya’s 10-item kit was such a hit that she had to make much more than anticipated. “Our place was like a wedding house for a few weeks and it was a lot of fun. People were buying it not just for themselves, but as gifts so that it would help the women I employ.” And that is something which has amazed her, she says. “In this new phase of life, I have come across only positive experiences and got to see the positive side of people. I get comments like, ‘Oh, a central government teacher now spends her days gathering cow dung’. But I would say I got a life after quitting the job. I had a salary but I had nothing but a job. Now I have friends from different fields including writers and even bureaucrats, all joined by our common interest in a healthy, environment-friendly lifestyle and organic farming. My personality itself has changed and my world has become bigger.”

The fact that she is now earning as much as she did as a teacher is just a bonus, she says. “Money was never a primary concern for me; I just wanted to afford basic education for my children. A simple lifestyle has always been my motto and that has been my strength as well. I work a lot now, but I enjoy it and I am relaxed while doing it. I’m at peace and I’m with my family, these are all profits for me. I’ll never say this should be the only way of life, these are just my personal preferences,” she says, adding that even today, her aim is not to make huge profits from this. “Right now, my biggest dream is to provide employment to ten people.”