YOU SEE PLASTIC GARBAGE, WE SEE POTENTIAL FOR ART’

WHAT CHANCES ARE THERE OF AN INDIAN WOMAN AND AN ITALIAN MAN, BOTH OF WHOM ARE PASSIONATE ABOUT TRAVELLING AND THE ENVIRONMENT, MEETING AND STARTING AN ‘ART SEA WASTE’ MOVEMENT TOGETHER? PLENTY, APPARENTLY. 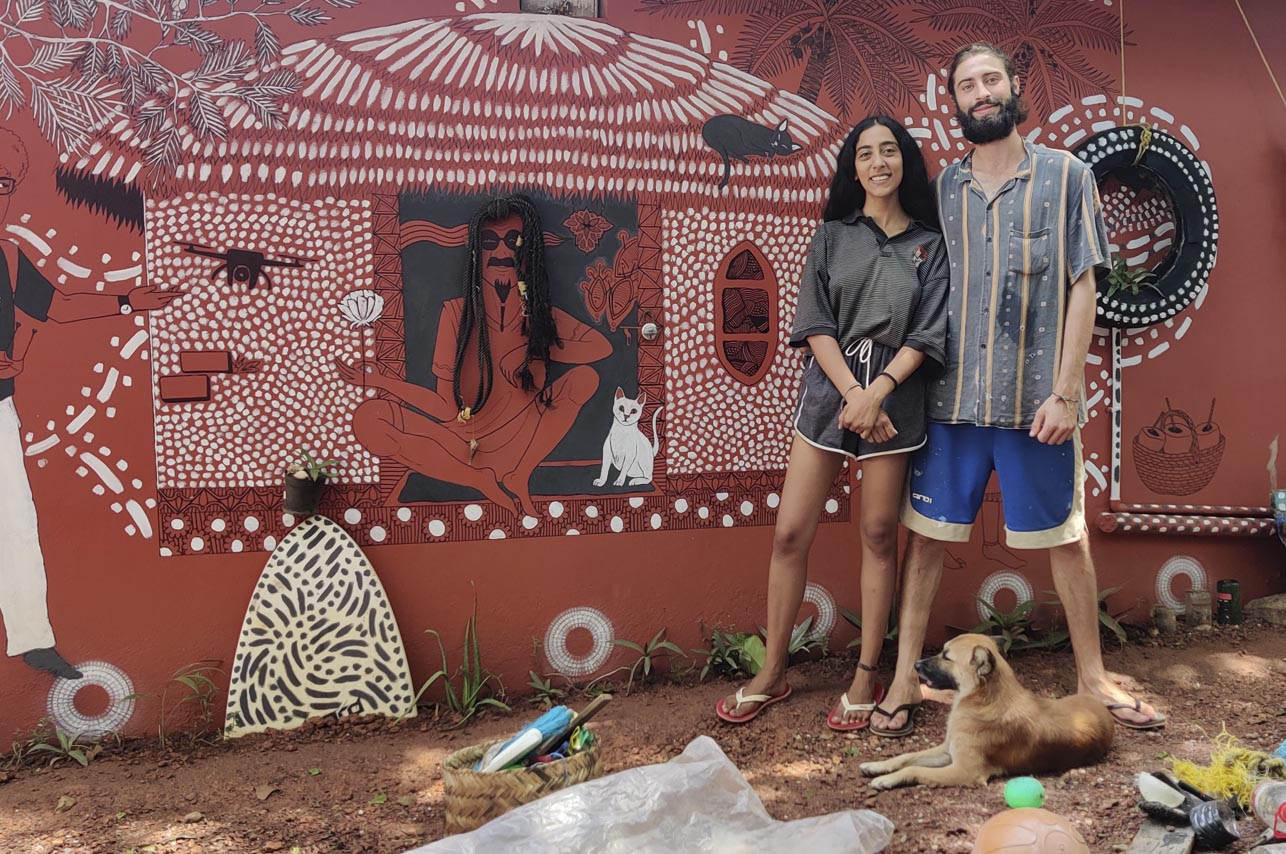 Sampda Mago, 24, from Delhi, and Giovanni Allegrini, 25, from Italy, met at the Himalayas. She was backpacking solo, while he was stuck there during the 2020 Covid lockdown. And when they found that they had a lot in common, they decided to continue their journey together, which involved more than travel. The couple started cleaning up the tourist areas wherever they halted, and turning the junk collected into objects of art! Sampda and Gio have moved to Munnar, Kerala, as of now, after being stuck in Varkala for a few months because of the second lockdown. As part of their movement #artseawaste, they also encourage locals to participate in the process of cleaning up beaches and other tourist areas and upcycling the waste to art.

So how did it all begin? “Well, we noticed that even in the Himalayas the tourist areas were littered with trash, mostly plastic. We ended up clearing them as much as possible, and then decided to extend it to the beaches at Varkala, our next destination,” says Gio. However, the problem with beaches is that the trash never ends, they say, as the sea keeps throwing up new stuff every day. Which is when they hit upon the idea of turning the trash into art. The pictures on their Instagram handle – Allemagoart – show their recycled works of art – a mix of contemporary wall art, lettering and Indian murals. A speciality of theirs is creating ‘3D’ wall art by adding recycled plastic onto walls, and one of the ‘masterpieces’ is a full-fledged mural extending across the outside wall of the hostel they stayed in, featuring figures inspired by the people they met during their travels. Old tyres, fishing nets etc, are blended into the theme seamlessly such that they no longer appear like trash. In fact, the hostel itself has been transformed into a work of art, many of its walls featuring colourful quirky art and lettering with travel themes. A wooden pallet which had washed ashore has been turned into an intriguing ‘game’, resembling a roulette wheel. “You see garbage, we see opportunities,” they say.

So, what, in their view, is the long-term solution to plastic garbage in the ocean? “Well, if you charge a Rs 1000 fine for littering a public place or tourist spot, people will definitely think twice before doing it next time. But there are a thousand other solutions, and the only real one is awareness and education,” says Gio, who is from the Udine province of Italy. “In Italy and Europe, the government has more to invest in recycling of plastic obviously, but more importantly, the people there are better aware. They know that a piece of plastic thrown into a river or water body will end up in the ocean. Only a minority will litter water bodies while the numbers are much more in India,” he says.

India, on the other hand, has another problem too, feels Sampda. “We always think cleaning public spaces is someone else’s job, and don’t like to get our hands dirty. That should be normalised.” She hopes that when people see her, an Indian, doing it with her own hands, it will encourage others to do the same. “Also, people should stop littering out of respect for their environment, the knowledge that this planet is home,” she says. Which is why they plan to educate young children in schools during their travels, and also tie up with NGOs for the purpose.
But how do they sustain themselves during their travels? “Well, we live in hostels mostly, and thanks to digitisation, we are able to take up projects online wherever we are. We would like to call ourselves digital nomads,” they say.

While Gio never entered the rat race and has been travelling around the globe for four years, Sampda quit her regular job in Delhi last year to travel. “I have been to Australia, New Zealand, countries in Asia and finally India. But India is a world in itself, it’s unique and offers such different and unique experiences,” says Gio. While Covid rained on his travel plans last year, it was also the reason he was able to start the Artseawaste project.

Travel, he says, can change you forever, in the right ways if you do it right. “Travelling solo can be difficult, and there will be hard times since there will be no one to help you. But it can change the way you perceive things and your perspectives on happiness. It’s beautiful and challenging at the same time but I’m glad I chose this path.” Says Gio.

Sampda, on the other hand, admits that taking such a route is much harder in India but says she had always challenged the norms of society. “I never accepted things as they are. I was clear about what I wanted from my life, and just worked hard to make it happen. It wasn’t impossible.”

At the same time, both say that there’s nothing wrong in going for a job in a multinational company and following a ‘normal’ lifestyle, provided one likes it. “It’s just that we couldn’t relate to it.”

The couple have also launched a brand of their own where they offer merchandise for environmentally conscious travellers. They have taken their first COVID vaccine dose and plan to get on the road soon and hope to cover as many coastal towns as possible. “More importantly, we want to get locals involved. So we are looking for places where it would be possible, and where people appreciate art. Our next destination is Tamil Nadu; Pondicherry probably, and later Goa. We will keep moving.”