IF YOU’VE EVER WONDERED WHAT THE MAKING OF SILK INVOLVES, WE HEAD TO RAMANAGARA IN KARNATAKA FOR A FIRST-HAND EXPERIENCE, AND MAKE A QUICK HOLIDAY OUT OF IT TOO! 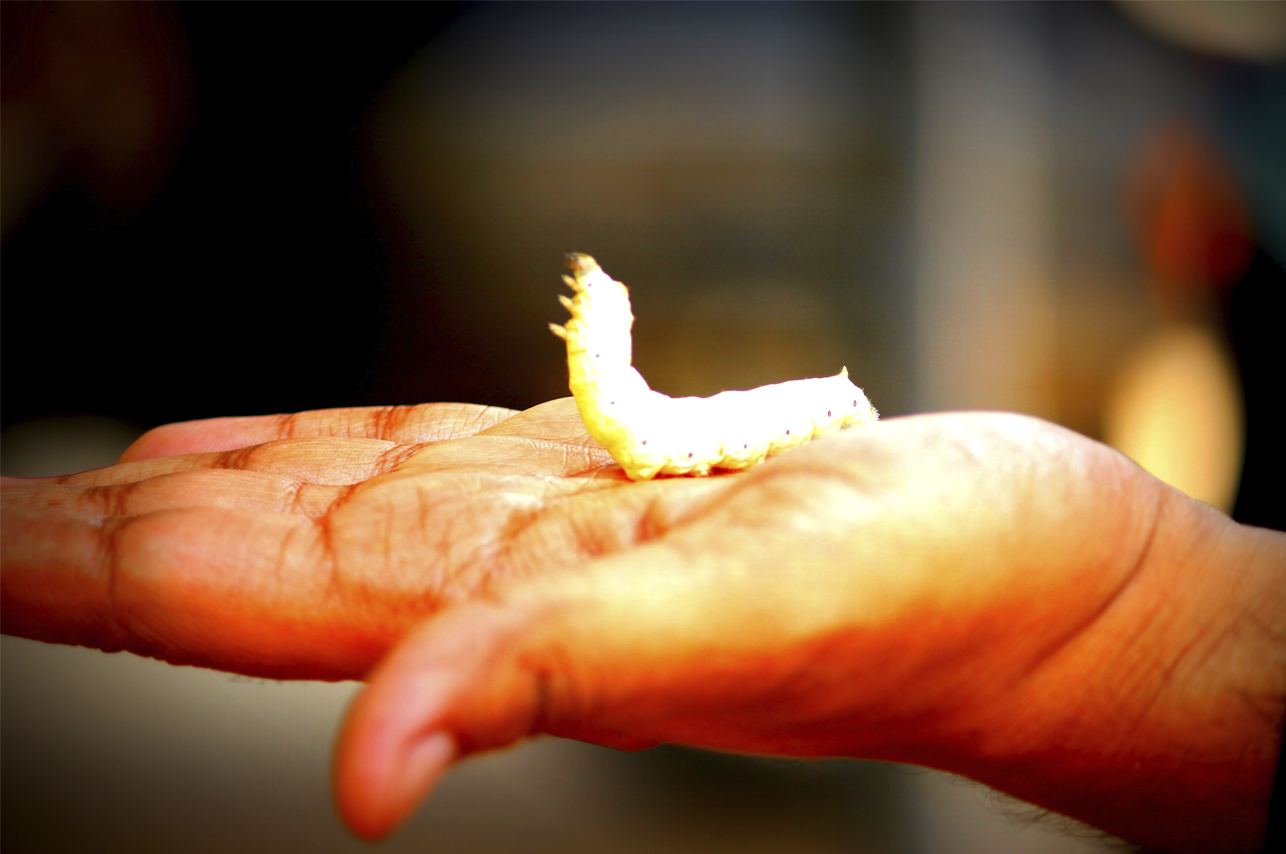 Ramanagara is around 40kms from the heart of Bangalore and its arrival is announced by a sudden change in scenery. While the Bangalore plateau is famous for its rolling and often unrecognizable hills (owing to the fast development of the city), Ramanagara welcomes you with visages of grand green hills, not as mighty as the Western Ghats, but impressive all the same.

Ramanagara is called the City of Silk, an epithet it shares with lots of other silk-producing cities across the country. What it also boasts about, however, is the fact that the town/city is world famous for rock-climbing. The town boasts of a national institute dedicated primarily to that very sport. And yes, the Bollywood classic Sholay was also primarily shot in this very town.

The almost one hour drive from Bangalore catapults you into this town, almost suddenly, and the heat (scorching, in comparison to Bangalore) is your first welcome.

Our first stop in Ramanagara is the silk egg farm. Most silk eggs are reared and created in small dark and damp houses as the silk moth is now no more a wild species and is completely absent in the wild. The males are frozen in a deep freezer and can be used at least up to three times before they eventually die. The male moths do not die when frozen and instead sleep and turn inactive till they’re brought back into room temperature. The female moths are also used once or twice and are mated manually with the males. Once the mating process is over, the females are left in isolation to lay eggs.

We take a look at a few pairs of moths mating and then also chanced upon a few females and their eggs. These eggs hatch into larvae that are then fed on mulberry leaves and grown to a certain age, after which they are ready for cocoon production.

We then drove into one of the villages around Ramanagara, to see the full-grown larvae and how they are readied for cocoon production. Silk-growers around Ramanagara divide each of these stages and look after only one part of the silk worm’s life cycle. The fully grown larvae are almost as long as an adult human’s middle finger and are also as thick in circumference. The larvae are placed on a circular bamboo tray with a spiral wall formation beginning in the centre and spiralling towards the edges of the tray. The larvae are dropped in, one by one, with spaces in between and are left on the tray to experience the four fevers of cocoon production.

All silk larvae must experience the four fevers, which is what irritates them into weaving their own silk cocoons. The process is completed in a few weeks and by the end, the tray is filled with silk cocoons that are ready for silk-thread extraction.

Here’s where we get to the gory part of this tale. Some extractors prefer to wait for the moth to emerge on its own, while some other painstakingly cut the moths free when they’re ready to leave (as these moths don’t know how to escape the cocoon). Once the cocoon is empty, the cocoons are sent for silk-thread extraction. The other method, more widely used, involves dropping the cocoons into hot water (thus, killing the larvae) and then extracting the silk-thread.

We watched both methods of extraction, and suddenly realized why ahimsa silk (extraction without killing) costs so much more. The life of the silk-moth comes to end here and the final product: pure glistening strands of gorgeous silk can finally be seen as they are spooled at the extraction centre.

One leaves the experience with a new found respect for silk, and I don’t think any one of us are going to be ever caught haggling for a better price the next time we decide to indulge in some pure silk fabric.

Before we leave Ramanagara town, we quickly stop-over at the government-run cocoon market and soon after, our noses almost dead from the putrid smell of the whole silk trade, we head to Kamat Lokaruchi — a renowned eatery close-by — that serves some of the best traditional meals in the area. We chose to dig our hands into an Uttara Karnataka (North Karnataka) thali, and the thali lived up to its fame — delicious!

After relaxing in the restaurant, and conditioning our bodies for the afternoon heat, we stepped into Janapada Loka, the folk-heritage park, right next door to Kamat Lokaruchi.

Janapada Loka has been around for quite some time and the museums and guided tours are definitely something to look forward to. We were also treated to an amazing folk-drum performance that ended with the drummers inviting some of us on stage to try our hand at the beat. We did try our hand, and we were terrible! The experience, however, will stay with us
for life.

The hour or so spent at Janapada Loka was relaxing and educational and also allowed us for some knick-knack shopping, something that would bring a smile to any traveller.

This quick getaway from Bangalore is educational and should definitely be on your to-do-list if learning about the world around you is a priority in your life.