BEING THE CHANGE YOU WANT TO SEE

MUTHTHAMIZH KALAI VIZHI S; FOUNDER OF NEELAM — AN NGO IN CHENNAI, WHICH WORKED WITH THE GREATER CHENNAI CORPORATION DURING THE COVID-19 PANDEMIC; HAS A STORY THAT YOU NEED TO KNOW AS RUPAM JAIN FINDS OUT… 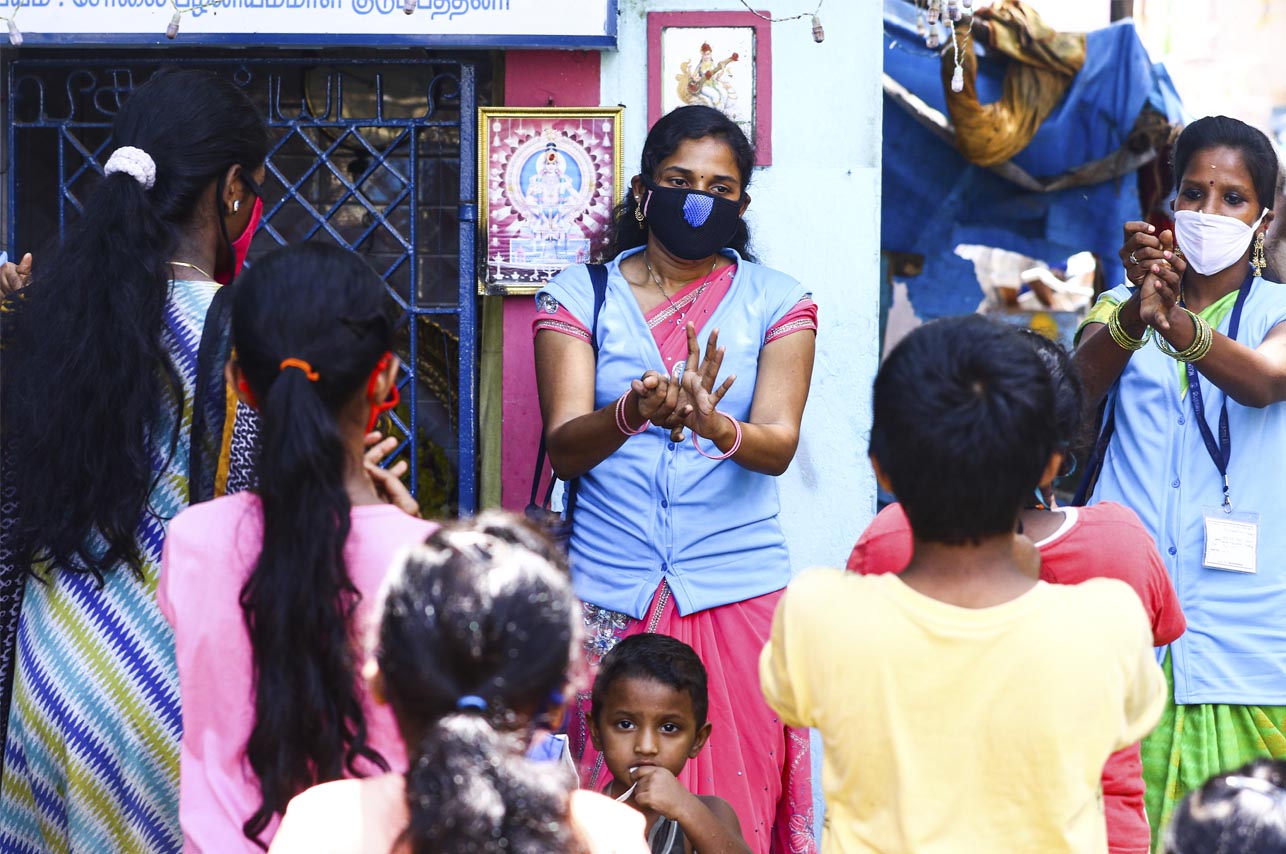 While cleaning a bus depot, which was her workplace, she excitedly said ‘hi’ to her friends who were boarding a bus to college from the same depot. But her ‘friends,’ who she went to school with, refused to acknowledge her presence. The experience left an indelible scar.

Born and brought up in one of the slums in Chennai, Muththamizh Kalai Vizhi S struggled for basic education. “I went to a Tamil medium government school. And whatever opportunities came my way, I grabbed it. I was a part of Bharat Scouts and Guides in school and was later even awarded by the then President, APJ Abdul Kalam for social work.” While this award led to her being offered a government job, it also made Muththamizh think over the ‘difference’ between her and others, especially those friends who went to college while she washed vessels at a railway canteen and swept bus depots.

From there, after fighting battles, breaking barriers, and overcoming the fact that being a dalit and a woman is not a singular identity she carries; though proud of her roots, Muththamizh today is the founder of Neelam, an organization that works towards cultivating young minds for a better tomorrow as well as for women empowerment, so that they don’t go through what she had to.

“My father was in the railways, and there is a Scouts and Guides quota in railways. So after completing 12th standard, I wrote an exam. The next thing I knew I had an appointment letter from the railways,” she tells us. While Muththamizh wanted to pursue social work, her family was insistent that she take up the government job. “I had no choice than to take up the job.”

Little did she know what was to follow. On the first day to work, Muththamizh was taken to the railway canteen, where food was prepared for around 500-800 people every day. “I was expected to wash vessels, clean the floor, cut vegetables and help with all other work involved in cooking and serving the food. I was shocked!”

Muththamizh went back home to tell her family she is not going to do this work. But her family’s financial condition didn’t let that happen. “My father was an alcoholic; I had an elder sister and brother, and a younger brother who was still studying. So I went back to work and continued with it for three years. However, simultaneously I enrolled for Bachelors in Psychology through distance education at Madras University. I also joined a diploma course in event management at Loyola College. I used to attend classes after work in the evening.”

After three years, Muththamizh walked up to her supervisor, requesting for a change in her work role. “I used to wash vessels for more than 5hours, and was developing blisters on my legs and hands. I also had a sinus problem. Hence, I wanted a change. My supervisor agreed. The next day, I was taken to a bus depot, given a broomstick and a basket and was told that I would have to clean the place. I immediately said I would like to go back to the previous work. But he said that an order for transfer is already written. So from now on, I would have to work at the bus depot. I did it for a year.”

Here, at the bus depot, is where Muththamizh was made to feel ashamed about the work she did or from where she came. “I would see a lot of my school friends who were now going to college. I would excitedly say ‘hi’, but they would ignore me, and refused to acknowledge they knew me. It hurt me. I would think what was the difference between us – they were studying, I was working; that’s all. But in their eyes, the work I did was degrading and embarrassing. Eventually, I started thinking that perhaps I am limiting myself. I always wanted to study a lot, to do something else than what I had been doing for the past four years,” Muththamizh shares.

Around this time, Muththamizh learned about Tata Institute of Social Sciences through one of her friends. She went for the orientation, appeared for an exam without her parents’ knowledge, and got a scholarship to do Masters in Social Work. Only then did she tell her family that she had decided to quit her job and go to Mumbai. The family didn’t want her to give up a Central Government job. “I fought with them, and at 23, I ran away from the house. For two years, I was not in touch with my family,” she tells us.

The first month at TISS was difficult for her because, “I hadn’t studied in a regular college before; and language was a big issue. I developed an inferiority complex and reached a point where I thought I cannot continue there. One of the professors, who hailed from Tamil Nadu and from an agricultural family, then put sense into me, saying if I quit studies and go back, I would neither have a job, nor the support of my family. Moreover, I would be demotivating others from my community who want to study. I gave it a thought, took up a part-time job at the library and decided to stay. I began participating in union activities. At the time of students’ union elections, my seniors approached me to stand for the president’s post. And in 75 years of the institute, I was the first dalit woman president. It wasn’t a cakewalk though. A lot of students came to me and said things like, ‘You are a dalit. You are a woman. You are from Tamil Nadu. We will not allow you to be our president.’ But I held the post anyway. Though challenging, it was a good experience. By the way, my favourite quote is by Maya Angelou: each time a woman stands up for herself, without knowing it possibly, without claiming it, she stands up for all women.”

Thereafter, Muththamizh went for a students’ exchange programme to the USA for a comparative study on caste system in India and racism in the United States. “After four months, when I came back to India and topped my class, I knew I wanted my family with me for the convocation. I went to Chennai, met my family, and learned about all the rumours that had been doing the rounds!” Muththamizh laughs, continuing, “one of our neighbours had told my parents that he apparently saw me at a Mumbai station, pregnant and selling something!”

On the convocation day, when her parents reached the campus, everyone from the security guards to the director of the institute, spoke to them, saying how proud they were of her. “That was the moment my parents’ perspective changed. They have never stopped me from doing anything after that.”

Muththamizh landed an opportunity to work in Australia through a campus placement. She was the Community Relations Officer for Rio Tinto. “Life suddenly seemed to fall in place. I felt comfortable about who I was. I was also able to settle all of my father’s debts and live happily. That one challenging decision I took to break the barrier and go and study — that had changed my life. Education, I realised, is a powerful tool to change anybody’s life. And then, I was overcome with the thought of what happens to those who have dreams and abilities but no means to work upon them, and the right opportunity to reach their goals. I wanted to help. That’s when I left my job in Australia, spoke to a couple of my friends in Chennai, told them I have an idea to start an organization and wanted their support. On November 14, 2014; that dream came true when we registered our organization as Neelam,” Muththamizh says.

The aim of Neelam is to create a society where everybody knows about their rights; and to support children and women in their education and empowerment. It’s been six years. The organization runs 20centres across slums and villages of Tamil Nadu. Every evening, classes are held for children. And on weekends, the children learn extra-curricular activities, the only criteria being that they should have 80percent school attendance. The students are supported through school till they attend college. “We have almost 100 volunteers, two teachers per centre and experts to teach various performance arts and extra-curricular activities. We also organize summer and winter camps to ensure that these children do not quit studies. Around 250-300 students come to Chennai, stay for five days, learn different art forms, and on the final day, they perform on stage, in front of a huge audience,” she says beaming with pride.

Neelam also has a women solidarity action network, whereby it supports women on legal rights as well as entrepreneurial skill development. The organization did some incredible work during the lockdown. “I had the chance to work with the Greater Chennai Corporation for their COVID-19 Community Intervention Programme. I had a team of 27 women, working in seven different slums in Chennai. These were women whose husbands lost jobs to the pandemic. Some of them even had little children at home. But these women were so dedicated. They worked for 5months, going to 300households for symptomatic surveillance, information and awareness activities. I am very proud of the work we did as a team.”

Muththamizh has come a long way and there is no stopping her. However, there is also no denying that she still faces the discrimination of labels. “No, it didn’t end with college. That I am a dalit still follows me. I do not have a problem with it, but people do. I used to think if one is educated and empowered, these identities don’t matter. But people still discriminate. I have had such experiences at workplaces, funding agencies who want to dig up my background and not my degrees, achievements or abilities. There are still institutional murders and suicides; I have seen the struggles of my own mother, sisters, aunts and neighbours. Hence, I am trying to do all I can to be a part of the chain of change. I believe if I can change even 10 people’s lives, they will further change 100 lives, and the chain will continue. I believe what Dr BR Ambedkar had said: cultivation of mind should be the ultimate aim of human existence.”