I AM SO HAPPY WE HAVE MORE REAL CHARACTERS THESE DAYS

WE CONNECTED WITH HER AS SOWMYA (KANDUKONDAIN KANDUKONDAIN), COULDN’T GET ENOUGH OF HER AS GHAZALA MEER (HAIDER) OR NIMMI (MAQBOOL) AND FELL IN LOVE WITH HER AS DIVYA (KADAL DESAM); TABU IS AN ACTOR THAT INSPIRES AWE IN EVERY FILM BUFF AND RŌMAL LĀISRAM DISCOVERS WHY… 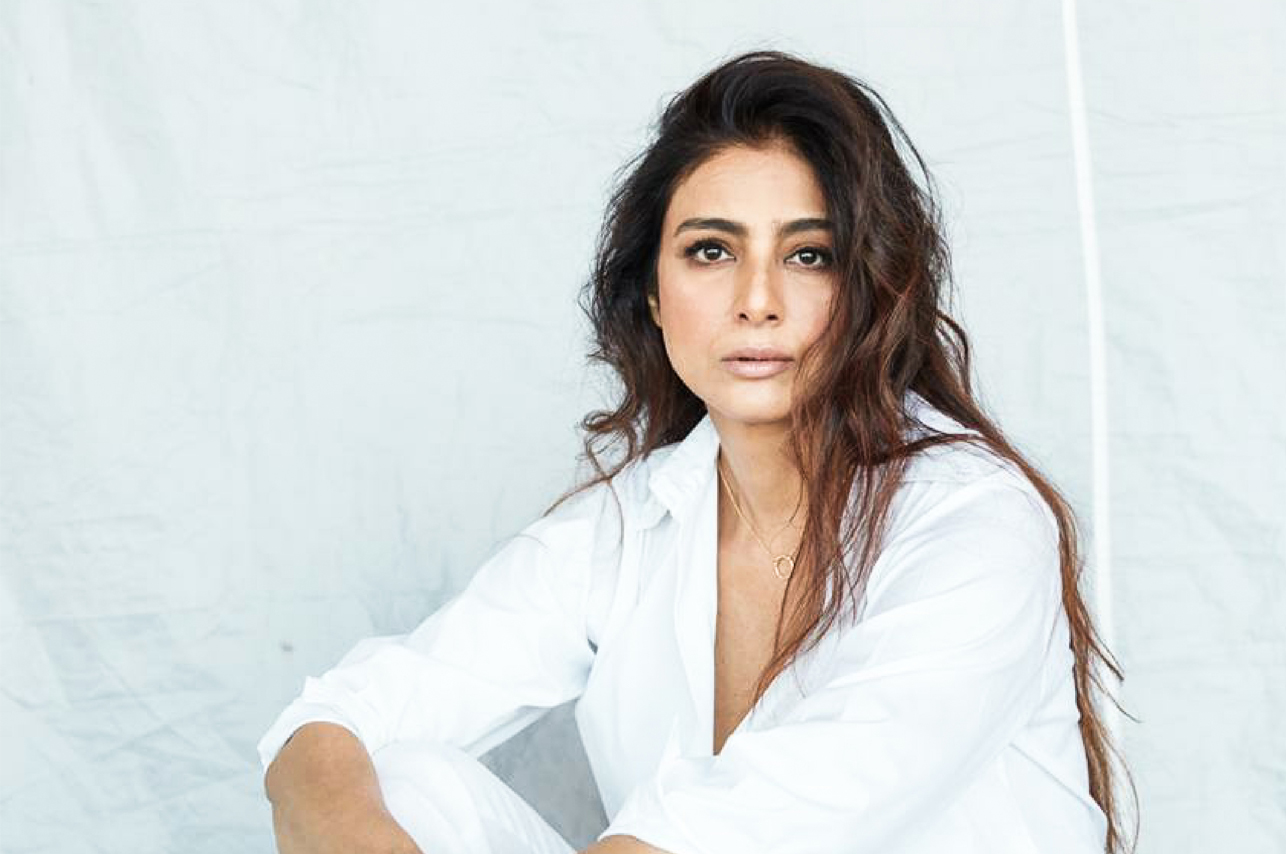 Padmashri Tabassum Fatima Hashmi is a powerhouse within herself and is considered one of the country’s finest actors and for good reason too! We catch up with the actor on a lazy December afternoon as we converse light-heartedly about cinema, life and so much more…

You are known mononymously as Tabu, quite unlike many actors today — how did that happen?
I actually didn’t have much of a say in this. When Dev Anand chose me for Hum Naujawan, he decided that he would use my pet name as my actual name. I was called Tabu by very close friends and family and everyone else, even in school, knew me as Tabassum. The name stuck, however, and then I realised it was easy to pronounce and so I just stuck to it. It still has regional variants — from Taabu to Thabu to every other possible pronunciation, but I love all versions of this name.

Did you know you had an illustrious film career ahead of you when you did Hum Naujawan?
Not at all! I thought this would be a one-time thing. My sister, Farah, was already acting in films by then, but I wanted to study and go abroad. I got offered Prem and began work on it. It was a huge launch and really big film but the film got delayed and in the process of waiting for the release, Bollywood just happened to me. Once more work came my way, I accepted it and there has been no looking back since.

You seem to have had a perfect mix of commercial films and art house films in your career — was this a conscious choice?
I’d like to say it was, but it wasn’t. I started my career with an open mind. I was open to any interesting role and I must say that I was really lucky that so many amazing roles came my way. I had fun with my masala films and the art house films challenged me as an actor. It was so amazing that directors believed in me enough to give me these strong often women-centric roles and for me as a young actor, there couldn’t have been anything more exciting.

A lot of your most-celebrated roles seem to be based on popular books — was this a deliberate choice?
Lots of people have pointed this out to me, but to be honest, it is just a coincidence. I am just lucky that directors had the faith in me to do these roles. I am not a voracious reader myself, though I come from a family of voracious readers and often more than not, I do not read the book if I am working on an adaptation. I prefer to follow the director’s vision.

You were an overnight sensation in Kollywood after Kadal Desam, yet you waited for Iruvar and have been very choosy about your career in Tamil cinema?
That just happened. I knew Kadal Desam was a hit, but I was very busy with my Bollywood films then. My hands were full. It was only when Iruvar was offered to me, that I felt like doing another film in Tamil. Plus, when you have the choice of choosing scripts in another industry because you have a lot of work in another — you tend to choose roles that excite you a little more. Thankfully, with my Tamil films that has always been the case. I choose roles that I know I won’t get to do elsewhere.

You seem to have a special bond with director Priyadarshan?
Yes. I have worked the most with him. 6/7 films and in three languages! I love the energy we share. He isn’t a director who micromanages. He speaks just a little and then expects the artiste to perform. He knows exactly what he wants from that scene. I remember how upset he would get if we ever took more than two takes for any scene. He believed the essence of the scene would be lost if one kept performing it. I consider him as a friend more than as a director. I think he knows me the best in the industry. Be it Virasat or Kaalapani, some of my best work has been with him.

Your foray into Tollywood has remained largely commercial?
I think this is the curse of being a commercially successful actor. With Telugu, all my films were commercial successes and therefore I continue to receive roles in proper commercial cinema. I’m not complaining about it, but that’s probably why nothing experimental has ever been offered to me in Telugu.

Have you ever considered directing a film?
Not really. But I am not averse to the idea. I am just very acutely aware of what an effort direction takes. I don’t think I can multitask as a director and I know that I prefer being an actor, being in front of the camera.

The film media loves obsessing over your personal life — how do you deal with it?
I don’t. I have learned to not give anyone any access to my personal life. I hate tags and I hate when people attempt to box people up. I am beyond tags and socially-created boxes. All humans are beyond these restrictions. It’s about time we accepted that. I wish people formed their opinions on me based on the life that I live and not based on the roles that I choose to play.

Have you noticed a change in roles being written and offered to women these days?
Yes! A world of a change! The roles being given to us female actors these days are brilliant and I think that they’re only getting better. I am so happy we have more real characters these days. We are flawed, we are raw, we aren’t expected to be goody-goody and we are multi-dimensional in nature. This is super exciting for me as an actor.

Any role that you wished you had been offered?
Kill Bill. What a role that was and what a movie!

A film that you watched recently that moved you?
Neerja. It brought me to tears.

A cause that you hold close to your heart?
Water conservation. I really feel I can do something about it.

Your advice to upcoming actors?
They need to advise us. Actors these days are just so much better prepared for the industry when compared to when we made our debuts.

What can we look forward to next?
I wish I could tell you. This COVID-19 situation has left everyone with a lot of un-surety. I don’t know when we’ll go back to shooting and I am just waiting to get back to work. Sadly, as actors we cannot wear a mask when we perform in front of the camera and so, it will take some more time before work can resume.

What keeps you busy when you aren’t shooting?
My little chihuahua, Chinnu, is a bundle of joy and demands all my attention when I am free.