TAKING ON TRADITION WITH A PEN

SINGER SOORAJ SANTHOSH AND FILMMAKER SHRUTI SHARANYAM HAVE BEEN AT THE RECEIVING END OF A LOT OF CRITICISM FOR THE RE-WRITING OF A TRADITIONAL MALAYALAM SONG. ASHA PRAKASH CATCHES UP WITH THE TWO ARTISTES OF FIND
OUT MORE… 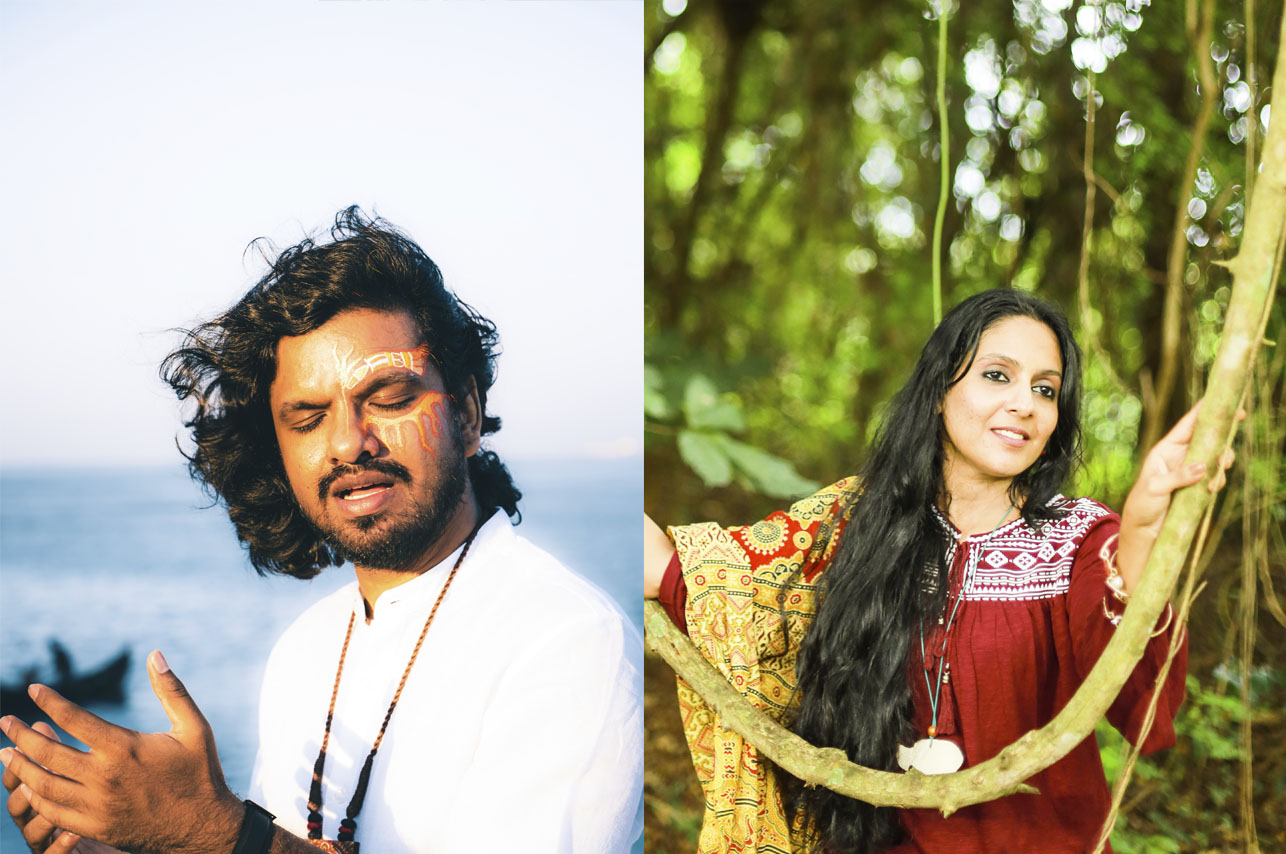 Re-writing tradition has never been a smooth sail, and history reveals that the re-writers have received more stones than bouquets. The case has been no different with singer-writer duo Sooraj Santhosh and Shruti Sharanyam (formerly known as Shruti Namboodiri) either, who decided to re-write the popular Malayalam folk song Aalayal Thara Venam, steeped in temple traditions.

Sooraj was well-known for singing contemporary versions of Malayalam folk songs for the band Masala Coffee, and he had already sung a version of Aalayal… for the band, which had the original lyrics. It was a major hit and had garnered 16million views on YouTube. However, the lyrics of the song had always struck him as regressive, and when someone asked him about it last year during a CAA protest he attended, he decided, that was it; he was doing a new version of the same song.

Shruti too, had made a name for herself as a short filmmaker and writer, with musicals like Baale and Charulata. The two had collaborated as well, for a music video Thanimalayalam, an ode to the Malayalam language. So when Sooraj sounded the idea of making a new video song of Aalayal Thara Venam, Shruti was immediately interested. She too was of the opinion that the lyrics were no longer suited to the times.

The first few lines of the song translate roughly to: If it’s a banyan tree, it needs a temple and a pond near it for people (devotees) to take bath in. If it’s a flower, it should have a fragrance, just like a man should have talent while a girl should be modest/disciplined. A country should have a king with a set of ministers, and citizens who are of benefit to the country. The song also talks about Hindu mythological characters who were good warriors.

Sooraj’s idea was to rewrite the lines of the song, a possibility Shruti hadn’t imagined. But she was all for it and they set out in search of the author of the song. After a lot of research they found no solid proof of an author; it was a folk song made popular by poet and dramatist Kavalam Narayana Panicker, who set it to tune.

The path was clear now and Shruti set out to re-write the lyrics, which, she says, turned out to be much more arduous than writing something new. “I was very sure of what I wanted to say, but I wanted to retain the beauty of the original song,” she says.

After a month or more of scribbling and re-writing, she finally presented the new version to Sooraj, which translates to something like this:

Does a Banyan tree need a platform, a temple and a pond near it? Does a flower need to be fragrant? A girl doesn’t really need to be modest. The ones who fought wars and those who feel the need for caste and family heritage… are all fails. What we need to fight for is co-existence and to live in unity. Human beings don’t need traditions or gold jewellery in weddings, but stands of one’s own, instead. What a citizen needs is a sense of awareness, and what the world needs is peace, not hierarchical structures of king and countrymen.

Sooraj and team immediately set to work on the production. The musicians’ parts were shot on an iPhone, and the rest of the video was made up of a medley of amateur dance clips featuring girls and boys of diverse backgrounds including children.

The final video started off with a few lines from Bob Dylan’s iconic song, The Times, They’re a-Changing. Sooraj added a little rap bit of his own in the middle where he says — “sit down and think thoroughly for yourself, whether it’s all needed or not.”

The video song was released in mid-October, and within hours, all hell broke loose. They had expected criticism but never imagined the kind of vitriol and virtual mob lynching that would be directed against them. To be more specific, their personal lives. Isn’t it hypocritical that someone with a caste surname like Namboodiri questions Hindu traditions was the question aimed at Shruti, while Sooraj’s old wedding photographs were dug up from the internet. Why did he have a traditional Hindu wedding at Guruvayur if he was against traditions? Why did he sing the original version as it is earlier, with Masala Coffee? The questions never stopped.

“I’ll be honest, the criticism did affect us a bit initially though we did have answers to all of them,” Shruti says. “I’m well aware of the caste privileges I might have received with my surname. But my surname is not something I’m proud of; it was something imposed on me at an age where I had no knowledge of caste. My values have changed over time, and I no longer believe in any organised religion or traditions. I have tried to change my surname officially on different occasions, but it was already there on my passport, all my documents, plus with the agencies I receive funding from. I have not used the surname for a while on social media, but then, funding agencies often run social media checks, and I did not want to miss a project because someone couldn’t find me on Facebook.”

As for Sooraj, he too had moved past the events in question but it wasn’t easy to convince the critics. “The visual portrayal of Aalayal Thara Venam by Masala Coffee was progressive, a celebration of womanhood, though the lyrics were the same. Regarding my wedding, I agree it was conducted the traditional way and they have every right to question it. But both these instances happened four to five years back, and over these years, I have become more aware,” he says.

At the same time, Shruti asserts that no one can question her right to question any belief or tradition. “The original lyrics aren’t completely outdated. There are still spaces in and around certain temples where non-Hindus are not welcome. However, the attack became political over time, and I felt that the best response is to not respond. They’re making it personal to divert attention from the questions raised in the work.”

Among the critics was Kavalam Sreekumar, son of Kavalam Narayana Panicker. However, Shruti feels that if the senior was alive today, he would have understood the new version and the intent behind it. Regardless, the video has garnered more than 5lakh views and there have been as many supporters as critics as well.

And under no circumstances is the duo planning to stop producing work that aligns with their beliefs. “I firmly believe that an artiste should have a perspective which they should adhere to while producing art. I would be really glad to see a generation of independent thinkers and responsible citizens evolve out of the influence of art,” Sooraj says, while Shruti feels this should be just the beginning. “Many more traditional songs need such re-writing when you think about the lyrics. Even our nursery rhymes,” she says.