KICKING UP A MUSICAL STORM

THE BAND STACCATO HAS BEEN IN THE NEWS FOR ALL THE RIGHT REASONS – FROM A REFRESHING TAKE ON MUSIC, TO A MULTI-GENRE CELEBRATION OF STYLES, TO VOCALS THAT ARE BRILLIANT AND MUCH-APPRECIATED. WE CAUGHT UP WITH THE BAND FOR AN INTERVIEW AND QUICK PHOTO SHOOT AND HERE’S WHAT TRANSPIRED… 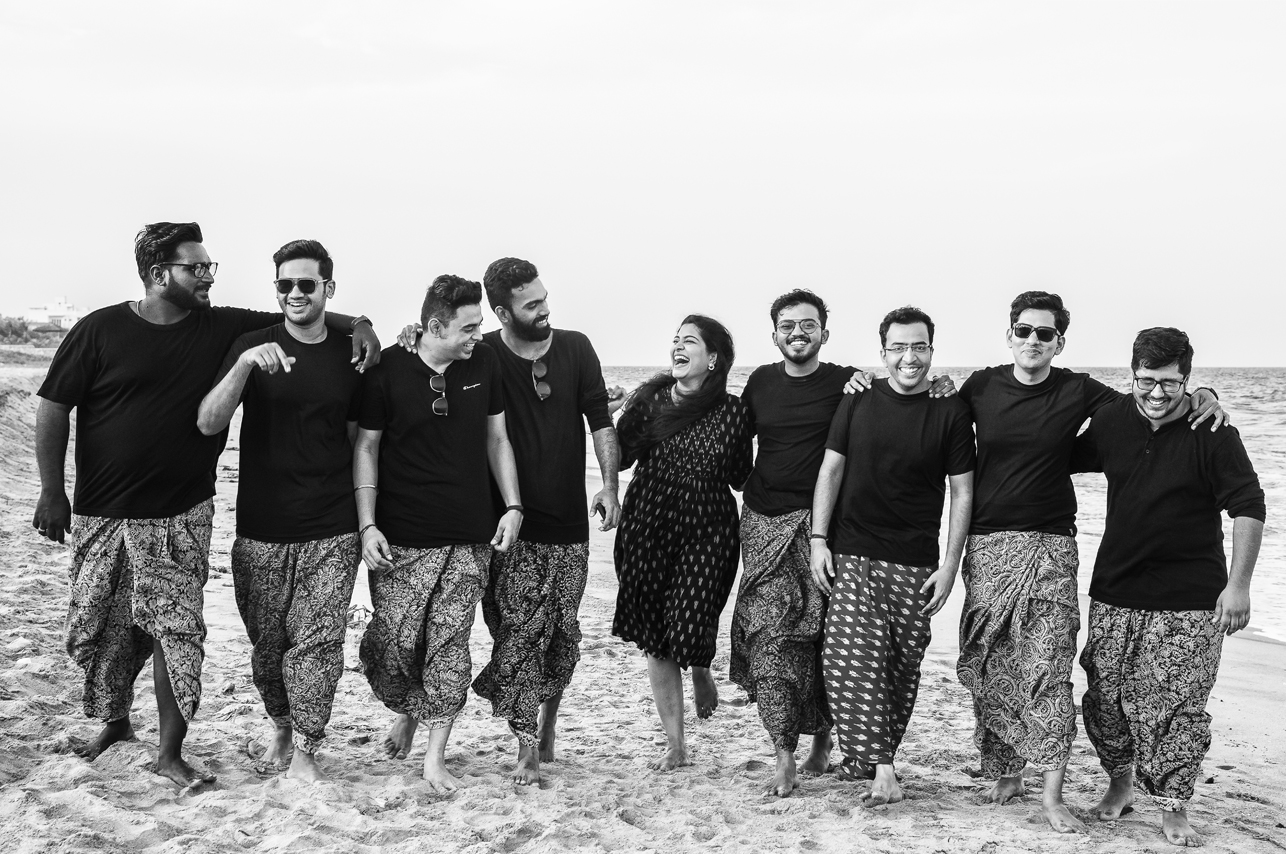 The band is everything you’d assume they’d be! High on energy and absolutely adorable! It adds to their charm that they can break into pitch perfect song at the drop of a hint of a great melody — that and the fact that they celebrate all good music. We were wowed by the band as we caught up with the merry bunch on a beachside on a beautiful rainy day in Chennai…

The name Staccato, how did you come about naming yourselves that?
The dictionary meaning of Staccato is — performed with each note sharply detached or separated from the others. Our band’s inception goes way back to 2011 when we performed the iconic song Veera Pandi Kotaiyile at a college cultural. Every team was asked to give a name for their band and we thought we would name ourselves Staccato, drawing inspiration from the arrangements/structure of the song. Down the years we started realizing that however detached or separated the notes are, each member brings upon that much of uniqueness to the band staying true to the name — Staccato.

How did you come together? You are a band of individuals with very different styles, so how did the unison happen?
Bala (Percussionist), Vikram (Keyboards & Music Producer) and Gowtham (Singer) were childhood friends and used to perform together during their school days. Later on each member of the band was added at important turning points starting from the college culturals, reality shows, recordings etc. Within the band, we bring to the table a cultural mix of music starting from Mylapore (Carnatic Music), Chennai ‘Western Classical Music’, The 80s & 90s classics of film music (MSV, Illaiyaraja, AR Rahman) and all the way from Dehradun, influences of Hindustani Classical.

Being a quintessential South Indian band, are you defined by certain styles or do you let each individual track take you on a new journey?
As mentioned above, each one of our band members have their own training and strengths in Classical, Carnatic, Film Music, Hindustani etc. which has given us the privilege to adapt to different styles. As we started performing together and discovering our own sound, we were able to play different styles of music but still sound unique in every genre.

From Carnatic to folk and to film songs — the band is as versatile as it comes; what do you owe this versatility to?
As a band, we are very fortunate to be born in an era where we witnessed the Golden and Transitional era of Music (MSV, Raja, Rahman), Indie Music by Colonial Cousins, Indian Ocean (among many others) and a new wave of artistes in the classical space who also took the world by storm with their collaborations and fusion music (Mandolin Srinivas, L Subramaniam, Shakti). Because we have grown up listening to all of these musical influences, unknowingly it translated into what we do.

Almost all of you do other things when not a part of the band — so what brings about Staccato’s unique sound?
We have a Chartered Accountant, Music Director, Event Manager and an IT professional amongst us. What keeps us together as band through all the differences is our bond and the camaraderie we share that make us a family.

How has Chennai reacted to you as a band?
Chennai has been our home and the audience has always inspired us to do better with every concert that we perform here. We have performed a full-fledged Carnatic fusion show in one of the most prestigious sabhas in the margazhi season; to a glamourous awards night; to pubs, malls, food festivals, corporate shows and weddings. Every piece we perform, irrespective of the genre, has been very well received. They are always looking out for new music and support new talents.

Where does Staccato see itself in five years?
Currently in India, The independent music scene is a whirlwind. We want to be a band that caters to a wide range of audiences across the globe crossing all barriers of genres, languages
and influences.

If you had to define the band through the elementals — what do you think would define you most aptly? Earth, Fire, Wind or Water?
We relate most to Water. Pure rain water; river, ocean — everything is fed by this water but each of them has its distinct flavour. We relate to this the most.

Where does the band draw its inspirations from?
Travel, food, other art forms, conversations and obviously the different pieces of music we listen to.

When can we see you next performing — live or online?
During the last eight months, each industry has gone through very trying times and so has the music industry which was affected deeply by the COVID-19 pandemic. As a band, we missed our home — THE STAGE. After a lot of thought and discussion, we decided it was the best time to create new content and reach out to the virtual audience which seems to be the new normal. We have come up with a concept ‘FRESHLY BREWED’ that will hit our audience soon. In this, we have reinterpreted songs that had a huge impact on us during our childhood. With a fresh take given by the band members, we’re making it a very unique audio visual experience. Watch it on our social media accounts and tell us what you think?