THESE HEROES AMONG US 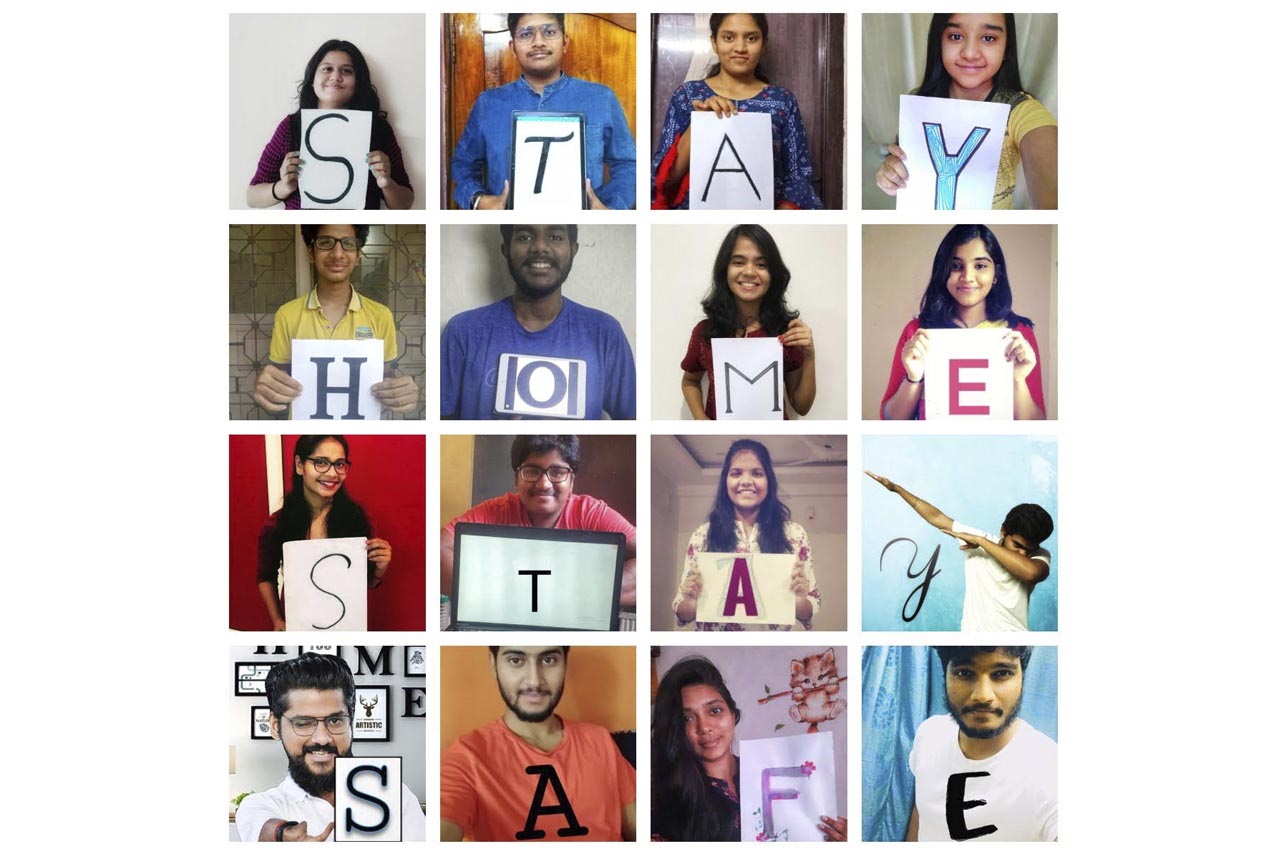 They say it is in the most difficult of situations that you realize who really is going to be there for you. And sometimes, they can be strangers. Absolute strangers.

While most of us stayed locked in our homes during the lockdown, and rightly so, there were some who believed there was a greater purpose to fulfill. Of humanity. Arun Daniel Yellamaty didn’t stop for a moment to think about his own safety. He got his volunteers and set out to help all those in dire need. His NGO, Youngistaan Foundation started COVID-19 Relief Support, working together with the Telangana State Police, the State COVID Control Room, the Cyberabad Police, the Revenue Department, the GHMC (Greater Hyderabad Municipal Corporation) and a few more NGOs. From providing nutrition and hygiene kits and cooked meals, to helping senior citizens with groceries and medical assistance… to also taking care of community animals – they did it all.

“I had 1,500 registrations during the lockdown. Can you believe it!” exclaims Arun, who utilized the manpower by dividing volunteers into batches – on ground volunteers who collected and distributed kits; backstage volunteers, who did all the packing working over night; and volunteers who were sent to various governmental bodies to help them with their relief drives. “We are an absolutely volunteer run organization, with no big names backing us. However, there were people who wanted to help but didn’t have a platform. They reached out to us. We raised money for grocery kits through donations and contributions; some restaurants came forward to help us with cooked food. We worked closely with the control room and the police, as through them it was easier to identify and reach the people most in need. We were able to connect with the transgender community as well as people with disabilities, who had reached out to GHMC and the Social Welfare Department. After people got to know we were helping the trans-community, a corporate company came forward to donate kits for 100 transgenders; while Wipro donated 2,500 kits for
migrant workers.”

The Youngistaan Foundation has thus far managed to help 13,603 families with nutrition and hygiene kits and 1,45,830 individuals with cooked food. They even went as far as the Nallamalla forest area, about 200kms from the city, to give groceries to indigenous people who live there. They sponsored 40,000 bread packets along with juice, biscuits and yoghurt to migrant workers who were travelling. The volunteers also streamlined a process of getting them onto the Shramik trains that were being run by the government. “There was a lot of confusion among people about the trains that would take them home. So we would sit at the police stations for hours making excel sheets and collecting data of who is travelling, etc.”

Migrant workers, daily wage laborers, the transgender community, people with disabilities, indigenous communities, lower middleclass and middle class people, domestic helps, security guards, slum dwellers, priests and pastors, old age homes, orphanages – Arun and his team reached out to as many sections of people as they could. “Recently, some bodyguards contacted us saying they are out of jobs. These are body builders who work at pubs. We are soon going to arrange to provide them with essential products.”

Arun, who has been doing social work for quite some time through his foundation, says this (pandemic) though was really, “hurtful and disturbing.” “To realize that so many people are suffering and are in need in a big metro city like Hyderabad was a reality check. Everything falls down to nothing in the eye of a crisis. We had children of senior citizens calling us from America, Australia, Dubai, New Zealand and UK, requesting for help. We have been able to assist 52 senior citizens with groceries and hospital help. Some of our volunteers even took older people for dialysis every alternate day, using their own vehicles. I am humbled by their commitment. The whole experience has been scary; our lives were at risk, but by God’s grace, not even one volunteer tested positive or has fallen sick.”

In our society, whether we choose to agree or ignore, there are communities we dismiss as lesser, irrelevant, or, non-existent. The third gender is one such community. As a section of society that is already stigmatized and discriminated against, the pandemic and the consequent lockdown was bound to make things worse for them. Unlike us, they do not have ration cards to demand essential supply. Unlike us, they don’t have the option of work from home. They work from anywhere they can afford a means to livelihood. But with the lockdown, things took a very difficult turn. “As soon as the lockdown was announced, I knew if we don’t act quickly, we will be forced into poverty,” says Rachana Mudraboyina, a member of the transgender community in the city. “I am glad and grateful some NGOs and donors – Safa, Henry Martin Institute, Hyderabad Urban Lab, Bhumika, Yugantar, Azim Premji Foundation, Janma Foundation, MSI, CARPID, Solidarity Foundation, Goonj and Youngistaan – came forward to help us with essential supply and money. We collaborated with them as the Telangana Women and Transgender JAC (Justice Action Committee). For distribution of kits, we took the help of Transgender Equality Society that connected us with trans-driver Samantha. We used her vehicle to go door to door.”

Some members of the community, Rachana says, had first approached the government, which promised supply them with ration. But after sometime, they were told that ration is unavailable. “Hence, we started distributing kits to marginalized trans-people as well as the rest of the queer community. We were able to help around 3000 people. We also crowd-sourced and distributed money to 300 people – `3,000 per head. Director Shekhar Kammula was kind to make a donation for 100 trans people. In total, we were able to collect/raise `35lakh – including the cost of grocery kit and, monetary help. We distributed in districts like Karimnagar and Adilabad and some areas in Rayalaseema too.”

Rachana says not even for a second did she fear about the virus. “Do we really have a choice?” she asks, adding, “the need was to be there for the community. There were posters on metro pillars near Ameerpet and Somajiguda that stated: if transgenders come to you, dial 100. It is because of them that the virus is spreading. How do you think that makes us feel? But then, this isn’t the first time, right? We don’t have a system to help us, so if we don’t step out and help our own community, who else will? There are trans people, who are transitioning, and they need hormonal doses, there are others with ailments. We arranged medicines for them.”

With people no longer allowing the transgenders to bless their new-borns because of the pandemic, they are left to beg or do sex work. “It is risky of course, but like I said, most of us don’t have a choice. However, when a few members told us that they want to try some other means of income, we got them sewing machines. Another group from Trans Equality Society has started making ginger garlic paste and pickles with the help of MSI. Please buy these so we can live,” requests Rachana.

The Robinhood Army, a non-profit zero fund organization, began COVID-19 relief work by helping migrant workers and slum dwellers. However, soon they realized that there is another section people who have been suffering in silence – the middle class and lower middle class. “These are people who will not step out to seek help, like the migrant workers or daily wage laborers, out of self-respect. We began identifying this section in residential communities as well as people working in hotels, bandiwalas, tailors, barbers, theatre artistes, musicians, auto drivers, security guards – all of who were out of jobs – while also contacting individual donors; and over the past two months, with the help of our 1,400 volunteers, we have been able to distribute 12,000 grocery kits,” says Uma Chilak, city head for Robinhood Army.

A system was put into place, Uma tells us, so as to make the entire process of finding a donor, a volunteer (Robin) and helping the needy, quicker. “With the lockdown not allowing people to move great distance, what we did was, for instance, a volunteer resides in the Madhapur area, they will reach out to individual donors in that area as well as identify the people who need help in and around the same area. This way, all they had to do was pick up the supply from the donor and drop them with the people who need it, in the same vicinity. Later, we collaborated with Exprs, a delivery organization to pick the kits from local vendors who were struggling with means of income because of markets being shut, and drop the same at a spot where the needy could collect them. So, the donor would Gpay directly to the vendor, the vendor would then pack and keep the grocery kits ready, and the Exprs guys would pick and drop those. The Isha Foundation helped us a lot in getting us donors,” says Uma.

The organization undertook a drive called Senior Patrolling, and through social media, spread the message that any old person living alone or in need of help can contact them. “Soon enough, we had many people calling us. Our volunteers would buy groceries and medicines and drop them at their doorstep. Furthermore, we collaborated with the Cyberabad Police and used their police vans and ambulances for hospital assistance for senior citizens,” informs Uma. And right now, the volunteers are busy with their Mission 30 Million. “Every August 15, we celebrate Independence Day with a special drive where all the cities across the country come together to serve the needy. This time, we are serving 30million people across 10 countries for 45 days, starting July 1 till August 15. In Hyderabad, we started involving a lot of social media clubs and influencers to spread the word for donations. Out of the 30 million, team Hyderabad’s target is to serve 6million across 16 chapters in the city and around 40 tribal hamlets in Telangana, Bhadradri and East Godavari for 45 days.”

The Good Talk Factory, an initiative to bring out aspiring stories of common people to the fore, does not have big donations or great social work experience or huge number of volunteers to boast of. But that’s not important. What they have is a heart to help. What matters is that they refused to sit and watch people suffer. Instead they went out of their way to do their bit for people suffering during the lockdown. They started a COVID Relief Fund, and the money raised through it was distributed. TGTF collaborated with the GHMC and a few more NGOs to help migrant labourers receive ration supplies. Yet another very important aspect that they touched upon during the lockdown was conversations on mental health. The volunteers conducted virtual interactive events through conversations with commoners on various subjects, including mental health. Raghu Dutt, founder of The Good Talk Factory, says, “we are a group of commoners for the commoners. The pandemic has affected us all, but the worst affected are the most common people. We have just 20 volunteers, but that was enough to get started. We spoke to people for donations, collected whatever we could and put it to good use. And this is not the end, because the pandemic is not over yet. So, yes, we need to do more.