SOMETHING REMINDED ME ABOUT MY FIRST OUTING TO MUMBAI: RŌMAL LĀISRAM REMINISCES THE MAGIC THAT UNRAVELED IN HIS LIFE, ONCE UPON A MONSOON! 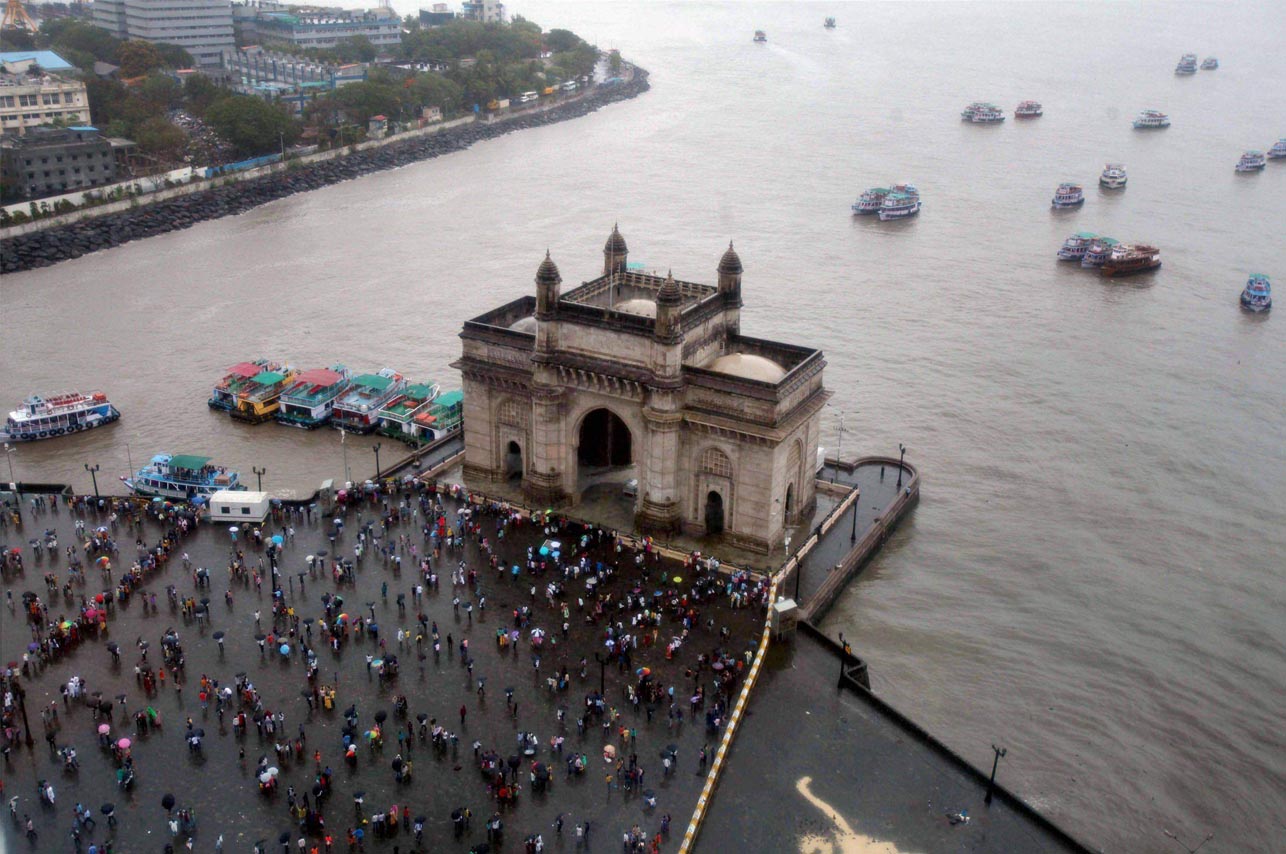 Almost a decade ago, I was planning quite haphazardly to leave for Mumbai, as my dream-job came crashing down and plans were quite unapologetically thrust down my throat. I was forced to choose between two situations, one offering something fresh — a new beginning and the other offering the same old life, the same old twisted feelings, the quiet suffering, the love games, the unquenched thirst for appreciation and several other such desires and needs that were left hanging loose, nerve-ends bleeding, almost begging to be severed and done away with.

It’s no surprise I chose the former and in a week, I was in Mumbai. The city of dreams, far away from everything I held dear – a city that breathed chaos, lived chaos and loved chaos.

Mumbai rains have a spectacular effect on newcomers and like the 5million others who entered that city that day; I too, was offered some relief from all the strangeness, when the first drop of sky-water touched my skin that afternoon.

Byculla (Bykhla) is indeed a strange and most often-a-not-preferred locality to start a Mumbai-darshan, but where was I the chooser! And so, a life changing process began at a quaint yet sufficiently spruced up hotel called ‘The Heritage’. I was ushered into a cozy, yet spartan room, done up for the not-so-envious single traveler, and like life wasn’t hard enough on me, I caught a cold. Funnily enough, I have a cold while I reminisce about this memory.

I tried catching a few winks, but sleep hardly ever does grace one in a new town and I wasn’t special enough for the dastardly beatitude (it isn’t? well, it should be!) to chance upon. I awoke after a pitiful half sleep-daze an hour later and decided to make calls to all the Mumbaikaars I knew. I had to visit the office, (my bread-giver) later in the evening and decided to get ready as soon as possible. I then went out for my first meal in Mumbai and decided not to venture out too far, lest I might fall prey to the tempting tentacles of being lost.

I would love to be lost in the dizzyingly inviting magnitude of Mumbai, had it been a personal trip, but here, I had to be in office in less than an hour and was famished, to say the least, so being lost and romancing the notion of it, had to wait.

I walked hardly a few steps and came across a relatively okay place to eat at. Walked in, sat down, browsed through the menu and tried choosing the safest dish on the menu to eat.

Now, I am a thorough South Indian/Manipuri when it comes to food habits — a day is never complete without at least one plate of those divine white grains of wholesome goodness, that the Greeks so fondly called Oryza!

My plan of action was to relish a plate of ‘Oryza meets the Islamic West and comes back looking good and smelling better with loads of spices cooked to perfection in an Indian mud bake contraption, with sumptuous bits of well-seasoned meat thrown in’— yes, a biriyani — only, this time, celebrating the smell of the sea around me, with some delicious prawns thrown in.

My first meal was terrible and I never ever tried eating a biriyani in Mumbai, ever ever again!

Work was exciting till I got an actual idea of what I was expected to do — it became a chore, ever after. I was soon shifted into a lovely double bedroom apartment, a hop, skip and jump away from the office and everything seemed manageable.

The curiousness of Mumbai however never stopped intriguing me. My office was landmarked opposite a ‘Gandhi Hospital’ that didn’t exist or was lost somewhere amid the crowded encroachments onto the pavements. Yet, every Mumbai taxi wallah worth his salt, knew exactly where it was, a foot or so here and there, but around the same area.

I was offered bajjis for breakfast and flattened pounded rice was a staple often ONLY made into poha, that I didn’t really mind that much, actually. I lived in a city suburb that strangely had no drycleaners and sooji halwa was made without milk!

My apartment was on a by-lane that was blocked on one side by the mossy walls of a veterinary college, and by houses of Marathi mill-employees on the other, among which stood the ugly monstrosity of a building I now called home.

I was in the very heart of Marathi manoos land. I was in Parel (ParaL), and not the cosmopolitan and more up-market Lower Parel, with its hip malls and apartments, but in the often ignored (and for good reason) Parel (E) [as some claimed], where the only neighbours I had were either noisy mill-legacy-hold-onto-ers or college going kids and Mumbaikaars who were either visiting the numerous (never actually saw one) medical colleges or educational institutions that were supposedly around the area.

Now that was my only landmark of joy, though no-one really knew it. Not the cabbies, not the bus conductors, not the friends who came and visited me and definitely not my local co-ParaLkars. How strange indeed!

This was my small world for most of my two months in Mumbai, or was it more than two months? I don’t remember.

A very limited life chanced upon me, rather thrusted itself upon me in that city. Yes, there were the occasional crescendos — visiting Phoenix Mills Mall to do everything from buy groceries to watch a film, the random unplanned trips (which slowly became very planned) to Colaba (Kulaba), ChurchGate and Goregaon, the formers for friends and sanity, while the latter to remind myself I was South-Indian, within the confines of an almost-always empty PVR theatre, where I watched the most random of movies, including the Telugu version of Aadhavan and some Tamil film, which was so bad, that I’ve forgotten about it completely (Thank God!).

I also remember the random booty call to Mulund one night — haha! The night of Deepavali to be precise, well spent in the arms of a hunk of a South Indian, who I didn’t bother to keep in touch with.

And then love happened. So randomly, it took me by shock.

But maybe it wasn’t love? Or was it? The first date was at the Four Gardens in Matunga. Was it even a date? This was preceded by a tearful visit to my motherland in an otherland — a good south Indian restaurant that served first class filter kaapi and dosais to die for!

Maybe it was the mann-vasanai that was weaving this magic, but all I can remember that night, was this man-of-my-dreams, telling me his life’s story as fireworks filled up the night sky and warmth and love filled my heart. We didn’t make love that night, but we did several times after that and even though nothing came to pass, he is still much loved. It was like a fairytale come true. Just that Prince Charming here wasn’t too convinced on charming me anymore.

He called me the other day to tell me he’d found love again. I wished I could tell him that too, but fate still has its evil unfair way with me. I am happy and elated for him, but a small bit of me inside, wishes it was me instead. Then again, I wonder who am I kidding. It was our first date; he decided to take me to a pretty undiscovered spot on the bedazzling jewel of Mumbai. We sat there and he spoke to me for hours about his twitter account and his twitterati friends. I loved listening to him, but somewhere, something seemed wrong.

The awkwardness was however broken, when a relative called him for some help and I decided to use my grey cells to the rescue. I did a good job, I think. But then again, did I make the unforgivable mistake of proving I had brains? Did I intimidate him and make him think twice of ever falling for me?

Whatever the reason might have been, our relationship soon reduced to the physical and that was that. A page in history had been opened and closed and I, for once, do not feel like opening it up ever again. I soon left Mumbai.

Relationships that were left in the hanging healed and life seemed bearable. So what was it today that made me want to think if anything went wrong? Was it the meeting of friends who brought back memories? Was it the revelation of a truth that was guessed several years ago? Was it the mentioning of a name that I had foolishly contacted a few days ago, reintroducing this person into my life? Or was it the stark loneliness that seems to shine on my face, a state that I have grown far too comfortable with?

I think it is the rain. The rains in Chennai remind me of the rains in Mumbai. Cool showers followed by searing humidity. They cool you down and then smack you with reality right after! I think this is also what we call fate? Who
knows, really!