THEY’RE FUNNY AND THEY KNOW IT

MAHILA MANCH, A FEMALE STAND-UP COMEDY DUO HAS BEEN IN THE NEWS FOR ALL THE RIGHT REASONS. ASHA PRAKASH CATCHES UP WITH THE DUO TO FIND OUT MORE… 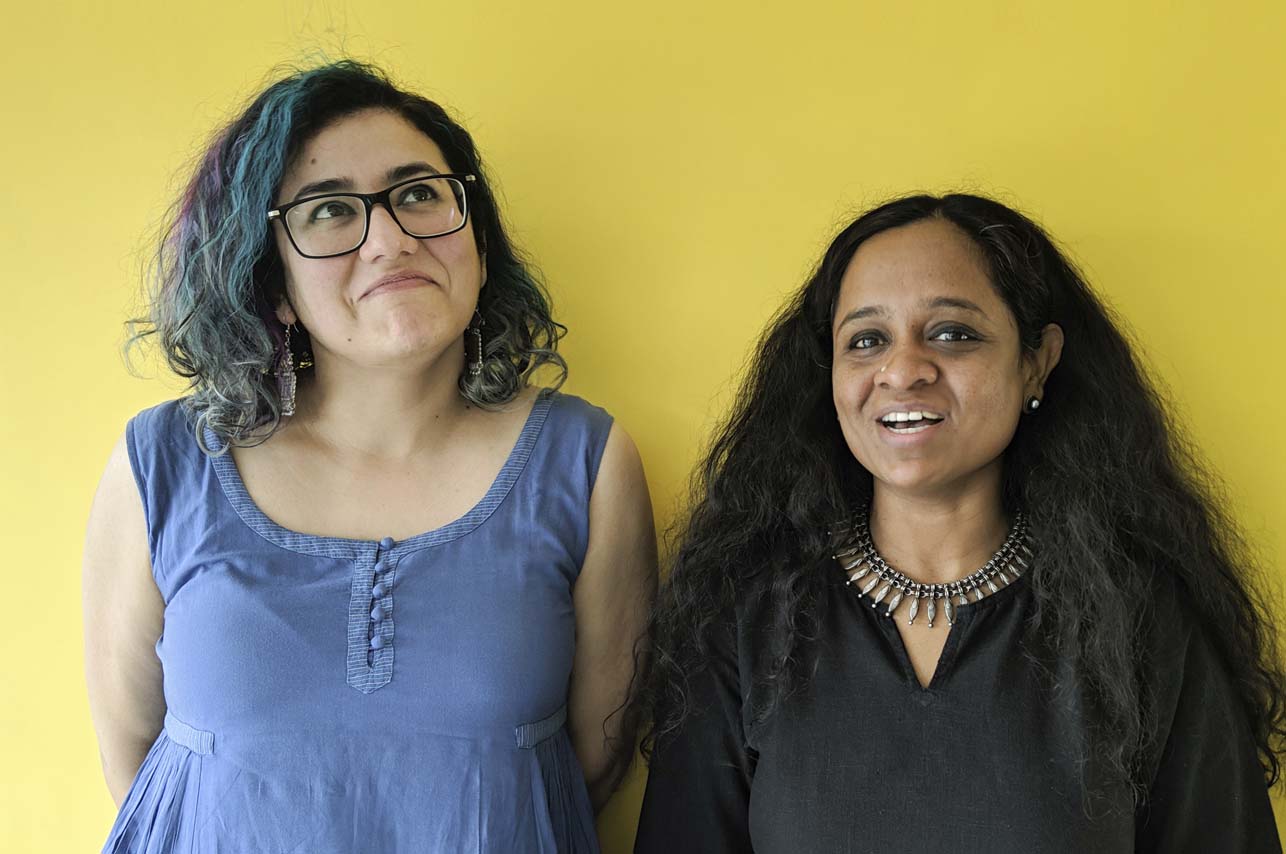 Say stand-up comedian and immediately a youngish urban man might come to mind. Well, that is exactly the image Shefali Pandey and Preethi Das are out to break. Based out of Ahmedabad, Mahila Manch, the stand-up comedy group founded by the spunky duo, has been making sides split ever since its inception in 2017. But then, Mahila Manch is not just any stand-up group; they make their audience think as well, on subjects they probably don’t expect from a comedy show. For each of their monthly performances, the performers choose a theme, which could be anything related to the current socio-political scenario. And although the group is called Mahila Manch, their stage is open to anyone who doesn’t usually get a platform. They have been accused of doing activism by fellow male stand-up comics but what if they are, they ask. Over to Shefali and Preethi.

Preethi: Like any other sector, stand-up comedy is male dominated. The content is male driven and the humour is aimed at women. I was tired of listening to men talk about menstruation for example, in a derogatory way, like how their girlfriends are cranky about it etc. So we talk about menstruation and consent and sexual harassment, all from our point of view.

Is Mahila Manch just the two of you?
Shefali: Preethi and I are the founders, and we have a few others who perform on and off. We are all people with regular jobs and this is something we do on the side, because we believe in this and we enjoy doing comedy. Preethi was a journalist and now teaches at a university. I did my engineering and then moved to New York to study journalism. I worked in media technology for nine years there. I have my own media agency at Ahmedabad now. Vasim Habeeb who was a part of the audience and a friend is now a performer. He’s a man but he’s a part of the core group. We started Mahila Manch as a platform for women to perform comedy on stage. Later we realized that it’s not just women, a lot of people don’t get space to perform – those without power. The stage and a microphone mean power. Usually these agents of power belong to certain sections, mostly men, mostly upper caste men. Vasim is a Muslim in Gujarat; definitely someone who doesn’t have power. We also ask people from outside to perform with us; whether they can do comedy or not. So we had a transwoman talk about how life has been like after becoming a woman, and a woman from a bootlegger community, one always associated with illegal activities in Gujarat, talk about her experiences. We had a dalit activist whose dad was a manual scavenger, talk about his life. In a 1.5 hour show, we do comedy for one hour, and the rest is open for other things. We have had 25 performers in the last two years. We constantly get requests from women asking whether they can perform.

What have the responses been like, especially from men?
Preethi: At times men ask us if they are allowed in as an audience and we say, of course. Men form half the audience in our shows. There is always a bit of a shock and awe first, when they realize women can be funny. Because power and brains are usually associated with men. I often get a standing ovation because I am a woman. But I don’t want that. Listen to my content, I say. There is always a little bit of silence and uneasiness when we talk about subjects like rape or menstruation but that’s okay. Many a time husbands and young people tell us after the show they don’t discuss such things as women’s sexual pleasure or divorce with their wives and parents but now they feel it’s ok, after laughing together about them. We have discussions after the show where people actually talk about them instead of slinging abuses like in online forms.

Shefali: I have found that when you talk about these things very emotionally, no one listens. My way is to step back and write humour around it. Get up on stage, make them laugh. People listen when something is presented through comedy. We often receive a bit of unwanted attention after the show but it’s no big deal. Something we find annoying is how people think it’s ok to bring kids because it’s a show by women. It’s never okay to bring kids to our shows. And then they accuse us of making ‘non-veg’ jokes. No male comedian would get that allegation ever.

Have you gotten into trouble for your jokes ever?
Shefali: We usually get a good response in Gujarat because our audience is very much like us. Once we had a show titled ‘Ache Din Ache Joke?’ We couldn’t get venues because of the title. So at Gujarat we suffer more on an organizational level. Once in Delhi we made a satirical joke about women’s safety. There were politicians in the audience and they walked out. We were also asked to get off the stage. That happens when the audience is not curated.

How was your experience performing in Thiruvananthapuram, Kerala earlier this year?
Shefali: We don’t do much political content in Gujarat for whatever reasons. But in Kerala we went all out. I literally wrote new jokes that morning. We did them freely and were cheered for. Like how the current Prime Minister is a lot more like Nehru than we would like to imagine. Nehru helmed the partition of India, while the PM is partitioning the country’s Whatsapp groups, families, universities and more.

Do you feel there is untapped humour in women?
Shefali: In normal life you can see funny women all around. And humour is actually about telling a story. And any day you will find more women writing better stories than men. They can also tell stories better. But you need to see three people doing something before you think you can do it too. And that’s what we’re trying to do.