BACK TO MOTHER NATURE

ASHA PRAKASH DISCOVERS THE NATURALIST LIFE OF ELDO PACHILAKKADAN, A MODEL THAT MIGHT MAKE SENSE IN A POST-COVID-19 WORLD 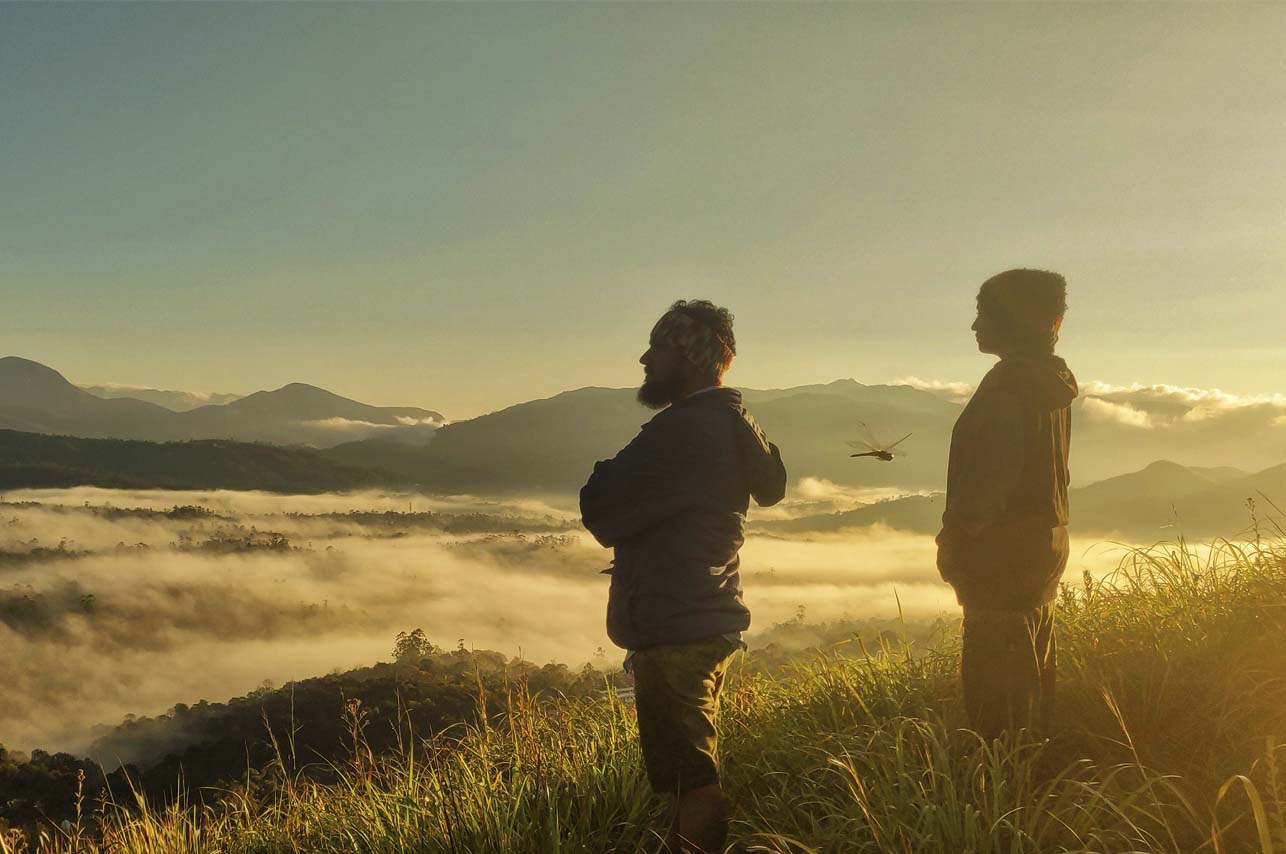 As I talk to Eldo Pachilakkadan, he has just finished his lunch – half a jackfruit. But then, for Eldo, there is no such thing as lunch and dinner. When he is hungry, he plucks a few fruits from his garden and eats them, just like the birds or squirrels around him.

Incidentally, his ‘garden’, named Swargam, is a mountain-top situated 4,300feet above sea level in the Western Ghats, in Idukki district, Kerala. Swargam in Malayalam means heaven, and heaven it is indeed. From the peak, one can often witness the rare phenomenon of a sea of clouds beneath, engulfing the mountain. Around 100 varieties of fruits grow in the 40-acre property which has a lush green valley as well, where Eldo lives in his tent. His army of cats, dogs and their babies, all of whom have gleaming healthy coats from a diet consisting solely of raw meat, roam around freely in Swargam where the climate is perpetually cool.

But then, Eldo isn’t someone totally cut off from humanity; he is completely updated on all news and happenings, is connected to the internet at all times, and almost always has his family, friends and visitors over. So he got to hear about COVID-19 and the lockdown but is untouched by the fear and the mad scramble for essentials. The only difference for him is that he hasn’t been getting visitors like usual as travel was restricted.

His wife and children, who live in Ernakulam, also had to skip their weekend visits to Swargam. But Eldo says he is happy doing what he loves best, living amidst nature, taking care of his fruit garden, reading and writing. The lockdown, he hopes, will make people better aware of what he actually constitutes ‘essentials’, and the need to be self-sufficient in a sustainable manner.

Eldo is not a vegetarian nor a vegan, and no fruitarian either. He is someone who believes that most ills of modern society can be attributed to the way humans have deviated from how nature intended them to live, according to their geographical location. “Kerala has been described as a ‘food forest’ by European historians who visited us centuries ago. The original inhabitants here must have eaten the foods most available to them, to their taste, which could be consumed as it is – fruits. That is the reason why I have opted for fruits as the major part of my diet,” he says.

Naturally, this wouldn’t be the case everywhere. “In parts of Saudi Arabia, for example, nothing but dates and olives grow, so definitely the original inhabitants there must have survived on meat. There might be regional differences as well. Someone in Idukki, for example, has a different biodiversity than in Alappuzha, where the food would have revolved around coconut and fish.”

But then, Eldo hasn’t always been living such a life. What he ate was of least priority to him till the age of 35, until which he worked successfully as a businessman and architect. Like many others, he was overweight and had high blood sugar by then. The turning point occurred during a period in his life when he started volunteering for an NGO – the Travancore Natural History Society. As part of the documentation process for a biodiversity survey, he got to visit and later live, in the deep forests of the Western Ghats for four years, on-and-off. “It was then that I gained critical insights about the importance of food in life. Animals in the deep forests untouched by humans are supremely healthy. And that is because they eat solely what nature intended them to eat. The root of all illnesses, I realised, is unnatural food.”

And thus began his study of natural diets and the transition towards it. His blood sugar levels, which used to hit 400, gradually came down and after a point, he stopped checking it altogether. Eldo soon left his job and moved from the city to his new abode in the mountain.

Within a year or two, his wife Bincy, a professor in a college in Ernakulam, also gradually adopted a raw food diet. Their little son, Shiv Alberto, initially asked for different kinds of food, but soon stopped. In fact, his daughter Rosa, who was born after the transition of her parents, has never tasted cooked food in her life!

“People think it’s a great injustice denying my children cooked food. But I never had to force them, they are well aware of what they are doing. They love visiting Swargam and checking out all the plant and animal life here. Also, my son who used to get all kinds of illnesses as a baby magically turned healthy following the transition. Last year, his attendance at school was 100percent. As for my daughter, we never had to visit a doctor for her,” says Eldo. And the plus? There is no cooking at their home! Even the kids choose the fruits they want and eat it by themselves, when hungry. “We should trust our bodies, first of all. If I feel like eating a banana, it means their body needs a banana. The body has a rhythm of its own and we just need to follow it.”

Not everyone can afford to leave their jobs, buy 50acres atop a mountain and move there permanently but that is not what Eldo is advocating either. “I’m not suggesting we go back to the Stone Age. Rather, make use of the latest information and technology to incorporate healthy changes in your food and life.”

The essentials of life – air, food, water – should be free for all human beings, just like it is for all living beings, he feels. “It doesn’t mean money is not needed. But it should not be made by commodifying essentials. The day humans started depending on an economic system for essentials, we lost our peace of mind. I would say slavery is very much a part of modern life; the only difference being that the reward for work is money today, instead of food.”

Ever since the transition, Eldo has dedicated a considerable amount of his time and energy to spreading awareness about a natural way of living – giving talks, running a restaurant which serves only raw food and more… Prior to the lockdown, he and a group of friends had started on a project named ‘Utopia’, which aims to help people create sustainable spaces in their own land.

“With a minimum of 50cents, food for a family of 4-5 can be produced easily, by planting seasonal fruits, tubers and trees in a planned manner. We first study the air, water and land of the area and create the spaces in such a way that there is no need for daily maintenance.”

A flower garden and a few species of bamboo are also part of the plan. “Basically, we try to simulate a human habitat. We also incorporate a little cottage where visitors interested in studying such spaces can stay.” At times those with land have no time or interest to work on their land and vice versa, so Utopia is designed as a community activity where volunteers from that locality who are interested in farming get the opportunity to learn and experience it.

Right now, Eldo is spending his days alone in his tent but he hopes to get back to working on Utopia as soon as possible. Swargam is also open to visitors, provided they are interested in learning about the natural way of life. “This is not a usual tourist destination and those who wish to drink and party don’t come here either.

Every evening, he visits the nearest junction to collect the garbage, which is used as manure for the farm. Waste from the local meat shops are converted into food for the dogs and wild boars. “The motto is simple, in every decision one makes, one should keep in mind how it will affect the soil, air, water, climate and the living beings around. Of course, I do buy small things. But I hope to make this space completely sustainable in a few years’ time.” He also plans to bring his family over permanently, eventually. What about an income, what about schooling for the children! “When your basic needs are met, expenses are little,” he replies with a smile.