ART FOR THE DIVINE

ASHA PRAKASH DISCOVERS THE TRADITION OF ONAVILLU, AN ANCIENT ART FORM (ASSOCIATED WITH THE ONAM FESTIVAL) THAT CONTINUES TO BE PRACTICED IN KERALA 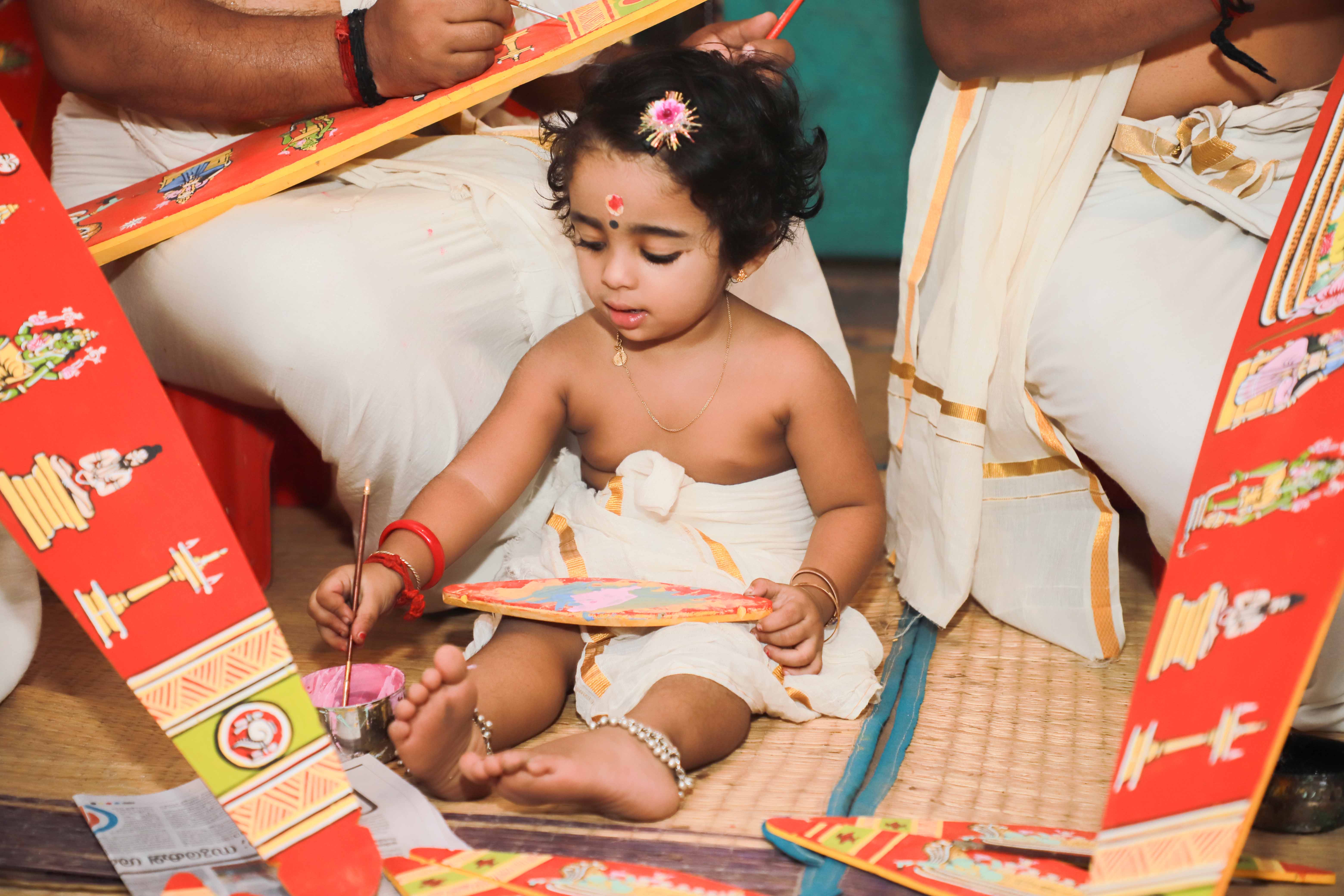 At first glance, the Onavillu with its small but intricate figures on vermillion painted wood might appear a bit too colourful for a traditional Kerala artifact. True enough; the original design was created by artisans from Kancheepuram and Thanjavur in Tamil Nadu, brought here especially by the then kings, back in the 17th century.

The uniqueness of the Onavillu is that it is the descendants of the same family — Vilayilveedu — who make the Onavillu even today, four centuries later. As you step into the premises of their 400-year-old house, the atmosphere is more of a temple than that of a house. Alongside the work-shed which is strewn with paint and half-finished villus, is a little shrine where lamps have been lit. Four brothers — Binkumar Achari, Sudarshan Achari, Sulabhan Achari and Umesh Kumar Achari can be seen immersed in work, doing exactly what their forefathers did and in the same exact way. “The Onavillu is not just a work of art, and not something on which you can experiment with your creativity. The skill lies in replicating the original patterns. It is primarily something we dedicate to the Sree Padmanabhaswamy Temple every year as an offering, during Onam,” says Binkumar, the oldest of the brothers.

There were different branches of the original family who used to make the villu but only the Vilayilveedu family does it now. Traditionally, only 12 of the pieces were made a year, exclusively for the temple. However, the public can order and buy one these days as it is believed to bring luck and prosperity when displayed in a house. “We work throughout the year now as the demand is that high. But it is not a job for us; it is more like a prayer, or a ritual. We start work after a bath and after offering prayers and pooja at the family shrine, with all the purity of a vritham (penance),” Binkumar says.

Thus, one has to give their horoscope and choose the deity they wish to be painted on their personal Onavillu. “Nowadays duplicates are being made by different agencies. But the essence of the villu is that the figures have to be painted in a certain way and it has to be consecrated before being handed over to someone, which devotees are unaware of,” rues Binkumar. The Onavillus depict the various avatars of Lord Vishnu and the events in their lives, but only their soumyabhavas (soft/gentle forms). For example, only the youth of Sreekrishna is depicted since there are no leelas (divine narratives of love) in his life afterwards, only battles.
How did the tradition originate? “The Travancore kingdom used to extend till Kanyakumari in the past and its seat of governance was the Padmanabhapuram Palace. The Thiruvattar Adikeshavaperumal Temple in Kanyakumari is even older than the Padmanabhaswamy Temple and is known as the elder brother of the latter. The sculptors of that temple were our ancestors. They had made two Onavillus with similar figures and presented it to the temple, those of Mahavishnu and Sree Krishna. The same tradition was repeated during the building of Sree Padmanabhaswamy Temple, and the then king wanted the Onavillu to be part of a temple tradition.”

However, there is an interesting story on why the Onavillus with their Vishnu avatars were associated with the Onam festival. Legend goes that King Mahabali had a wish, to see the Viswaroopa, or the upcoming avataras of Mahavishnu, before being pushed down to the netherworld by Vamana, who was only the fifth avatar. The king prayed hard and Viswakarmadeva appeared before him and granted him his wish. Acharis are believed to be descendants of Viswakarma, and whenever the king visited Kerala once a year to see his beloved subjects, he was allowed to see all 10 avataras of Vishnu created by the Acharis, at a Vishnusannidhi in the Padmanabhaswamy Temple here. All these stories have been passed down generations orally, and has not been recorded anywhere, Binkumar clarifies.

But the ritual of presenting the Onavillu seems to concur with the legend, as the villu is traditionally shown towards the west from the east during the presentation by the makers, although the idol of the reclining Vishnu lies is in the west of the temple. “It is believed that Mahabali is standing there, one among the hundreds of devotees who throng to catch a glimpse of the Onavillus.”

The six pairs of villus are kept in the temple for three days and handed over to the Travancore royal family on the fourth day, where they are stored in a pooja room. After one year, a new set arrives and the royal family can present the old ones to special guests. “They are called pallivillus for this reason, they belong to three people; we, the creators, the God to whom it is offered and the king who stores it,” says Binkumar.

Meanwhile, work goes on. While one brother does the outlines, the other fills in the colours, all natural. “There was a time when only homemade colours like karippodi (charcoal powder) and chenkal podi (laterite powder) were used as colours. Now we use colours used for Kalamezhuthu, after processing it,” says Sudarshan Achari, also a temple sculptor.Only wood from a devagana (of the Gods) tree of is used for the villu, usually from kadambu trees (burflower). “The wood is smooth, not fibrous. In the past, the tree used to be worshipped before being cut. Now we source it from the forests of Tamil Nadu so we worship the wood instead,” Sudarshan adds. The wood work is also done by people associated with temples.

The villus come in three sizes, 4.5feet, which is one-fourth of the size of the reclining Mahavishnu at the temple. The only innovation, if at all, from the family is the creation of the mini Onavillu, which was introduced for the convenience of the current day devotee, who cannot always travel with a 5feet long villu, especially abroad.

An interesting aspect of the artifact is that the kunjalam or tassels at either end are made by the inmates of the Central Jail nearby. “It was a practice started by the then king, who decided to include prisoners in the making of various items for the temple. No one is a criminal by birth, he believed, and any cruelty of the mind could be mitigated by Godly activities. The prisoners voluntarily turn vegetarian during the making of the villus; they told us when we visited them once. There was no religion there.” The brothers work all day from morning till evening, creating the same set of patterns and figures. Binkumar started when he was 14, and is now 54. Don’t they get bored? “Not at all, we consider it a privilege to be able to make these divine creations,” he says. Accompanying them is little Sivaparvathy, daughter of Sulabhan Achari, and 14-year-old Ananthapadmanabhan, also a member of the next generation. The latter joins his uncles and father in the Onavillu making while Sivaparvathy is fast learning. Only male members do the work traditionally, but considering the talents of the girls in the family, they are considering including women as well.

“Nobody taught us the art, and we learnt it by watching our fathers and other relatives. Similarly, we won’t force any of our children to continue the tradition. If any of them are interested, we will encourage them. It requires great dedication and discipline, and only someone who realizes the importance of the tradition and the need for the vrithashuddi should take it up. Otherwise we could just employ a few workers and mint money by churning out hundreds of villus,” signs off Binkumar.

Corrigendum: The previous article in this series wrongly captioned a picture on Page 49 as V Ratheeshan. Apologies.