GOING BEYOND THE HOME KITCHEN

AS LONG AS THE HUMAN RACE HAS EXISTED, WOMEN HAVE BEEN RESPONSIBLE FOR FEEDING THEIR FAMILIES. FROM FORAGING FOOD IN THE STONE AGE TO GROWING GRAINS IN MEDIEVAL TIMES TO ARRANGING FANCY BANQUETS TODAY — THEY HAVE RULED THE KITCHENS, DINING HALLS, AND FOOD CHAINS WORLD OVER. WHEN IT COMES TO COMMERCIAL KITCHENS THOUGH WOMEN HAVE ALWAYS BEEN CONSPICUOUSLY MISSING — UNTIL NOW THAT IS, AS
ANUBHUTI KRISHNA DISCOVERS…. 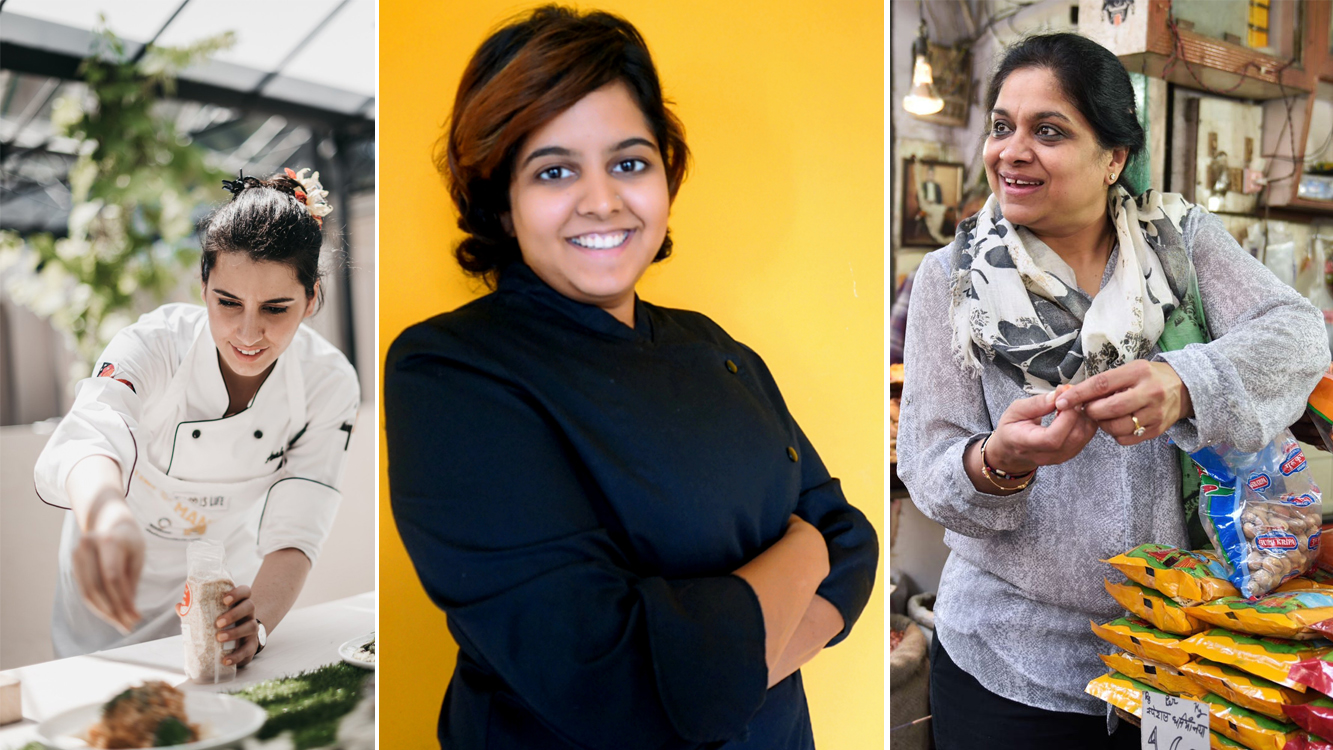 If you try to Google the first women chef in India, you will find nothing. If you go back and ask historians, they may stare blankly at you. If you look in libraries, you’d draw a blank. Who and where the first woman chef was is as much a mystery as their absence from the commercial kitchens over the centuries. “It is not often you see a woman commanding a kitchen,” agrees Anahita Dhondy, Chef-Partner at one of India’s most loved restaurant, Sodabottleopenerwala, Bangalore and Delhi. Dhondhy, who is one of the most recognized faces in the industry, feels this is not a coincidence. Long and late hours, labour intensive work, and domination of men in the kitchen always meant the job was never considered suitable for women. They had to run families and raise children. Times have changed though. And while there may be not many women at the helm of commercial kitchens, the numbers are far larger than they were even ten years ago.

Role-Models like Anahita herself maybe one key reason for this change, glamourization of food in media — social and otherwise — could be another.

“When I was younger there were hardly any women chefs in Chennai,” smiles chef Payal Rajankar of the Gourmet Gig, Chennai. Payal would watch Nigella Lawson’s shows on TV and wonder if there were any such women in India. “A few years later when I saw chef Archana Kurup at
The Park, Chennai; I found a real hero. I knew I had to be like her.” Somewhere between watching Lawson cook on TV and witnessing chef Archana run her kitchen, a seed to be a chef was sown in a young woman’s mind. It was not long before Payal found herself working under the same chef at the same kitchen (chef Archana, not Nigella!).

If the dearth of role-models and the ways of the world prevented women from considering commercial kitchens as a career back then, the growing number of women, changing dynamics and the focus of the media in today’s times, has brought the profession into the spotlight. Then there is the Internet. “With the internet, says Payal, “you can see what is happening in the food space all over the world.” And so, even if you don’t have a woman chef in front of you, you know they are thriving and so can you. “Girls now know that is an option open to them.”

The internet and media have indeed been the biggest game changers. If you open Facebook or Instagram you would find thousands of women chefs. TV channels, award functions, newspapers and magazines, regularly bring out stories of women working in the food space. Women are representing India at international conclaves, leading initiatives, running restaurants and hotels. “Lately there has been a lot of focus on women in the kitchen,” says Anahita who herself is a darling of the media. The exposure, she believes, encourages young women to take up the profession and educates society about changing times.

There was no media or role model when the first generation of women chefs entered commercial kitchens though. Manisha Bhasin, Senior Executive Chef at ITC Hotels, pursued her career in cooking at a time when there were hardly any women in the industry. For her it was not media or other women that paved the way, it was the excitement of doing something new. One of the most respected names in the industry today, chef Manisha feels kitchens are neither hostile nor sexist. They just need skilled people. “I have found the experience in the culinary industry positive and encouraging and have worked in an atmosphere where one gets equal opportunities to showcase the talent.” On her part chef Manisha has ensured there is a fair representation of women in
her kitchens.

With more women at the helm of the kitchens, things are getting even better: more girls are joining hardcore front lines. Established chefs feel it is their responsibility to make kitchens accessible and easier for newcomers.

Ease is not what commercial kitchens are about. They are unforgiving spaces for both men and women. “You either fit in, or leave. It has nothing to do with being a man or a woman,” asserts Payal. With age and familial responsibilities, most women are forced to step out. Some also give up because of the sheer labour involved — reason why the others have to work doubly hard to prove they won’t.
“A chef is a chef,” says Anahita, “it doesn’t matter if it is a woman or a man. Just like a doctor or an engineer, a chef is known for their skill — if you can take the hard work, you survive.” Sadly that is not always the case. “A lot of women chefs drop out because they cannot take the pressure and that is sad because hard work is one thing that cannot change about this job.”

It is not that women haven’t been a part of the culinary ecosystem. Women have always been front housing in restaurants, tending to bars, baking, and keeping tables. They have just been absent from the kitchens. The trend is changing though and that’s something we can all be happy about.