WHO SHOULD KERALA BLAME? 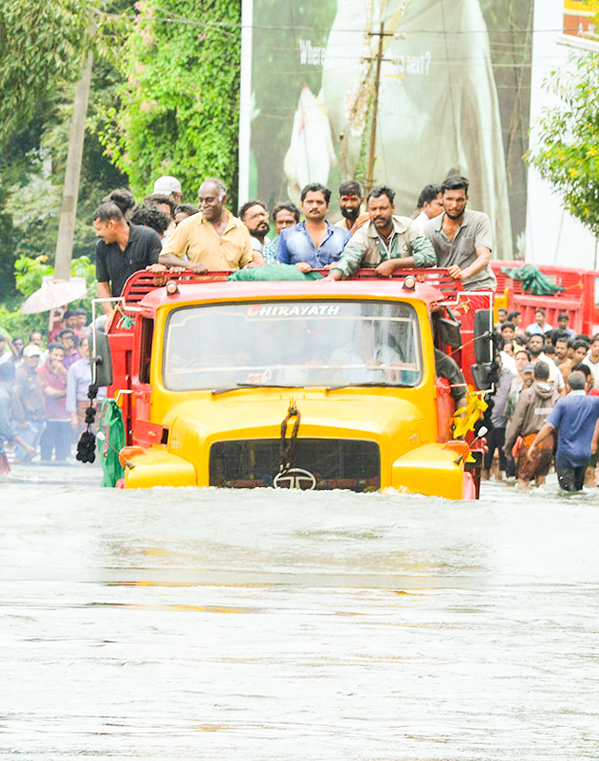 THE 2018 floods which hit Kerala was termed the disaster of the century for the State. Something on that scale had occurred last in the year 1924. Of course, it won’t happen again in another 100 years, everyone thought. Until August 2019. While the worst hit areas were in the south of Kerala in 2018, it was the northern areas which bore the brunt this time. Evacuations were done early in flood prone areas, but there was no predicting the devastating landslides, and the death toll crossed 100, yet again. The rains seem to have abated now, but Malayalis have woken up to the grim possibility of the floods becoming an annual affair from now on. And the fact that despite all the damage and loss of lives, practically nothing was done in the past one year to prevent or lessen the impact of a second flood from the part of the authorities.

One of the reasons cited for the 2018 floods was the unscientific and simultaneous opening of multiple dams, but there was no overflowing of dams this time. The landslides were a result of sudden, excess rainfall but haven’t we been the monsoon capital of India all along? Well, the recent phenomenon is partly or maybe fully, a consequence of human intervention according to environmentalists and geologists; a senseless mushrooming of quarries in ecologically sensitive areas in the Western Ghats, massive deforestation which has led to the formation of tunnels in the earth from rotting roots of trees, clogging of water channels over the years from mud, garbage and plastic, plus, of course, global warming which is wreaking havoc on the climate like never before.

Mediaperson Viju B’s recently released book Flood and Fury aptly talks about how the Western Ghats, especially the Wayanad area, would witness landslides in the near future, all owing to human manipulation in the form of quarrying and altering of natural slopes. And the author’s predictions eerily came true. “We have also been reclaiming the rivers snaking through the Western Ghats, with sand mining and encroachment. They were the channels for the rain water and in doing so; we have clogged the arteries of the Ghats. It’s no wonder hemorrhages
resulted,” says Viju.

The debates about the reasons could continue endlessly, and so the question that we should be asking could perhaps be what we can do about it. Rather, the floods were not a crime which has a culprit but something which is ongoing, a continuous crime, according to CR Neelakandan, environmentalist. “Only the nature, intensity and scale of the consequences would be different the next time. Climate change is a reality and the contribution of one person or one State towards it is abysmally low. But we are treating it and the other contributing factors of disasters as fate accompli rather than man made phenomena,” says Neelakandan.

The media itself is to blame to an extent, admits Viju — it didn’t pay enough attention to the Gadgil Committee report published in 2011. “Climate change is a reality and we can expect a 1-3 degree increase in the temperature of the Western Ghats, which will affect us in multifarious ways. It is high time we started seeing the Western Ghats as a dynamic organism which needs to be protected, instead of looking for means to exploit it.”
But what can a lay person, who is not part of any decision making body, who is not a quarry/estate owner or builder do to protect the environment? “He or she can think globally and act locally,” says the activist. “Each individual can ask himself/herself these questions: am I doing anything which increases the intensity of these phenomena locally? Can I control my choices like house construction, water and energy wastage? Is my house built to face such a calamity? Instead of the — everyone’s doing it, what’s the big deal — we are used to.”

More important is to protect natural water resources and natural vegetation, which also requires the participation of local communities. “Suppose there is a private or public well in your locality. You can start by protecting it and depending on it for water. Creating decentralized sources of water and energy will lessen the impact of isolation in the event of a natural calamity,” Neelakandan says. And it is not the government which deposited tonnes of garbage and plastic in our water bodies but each of us. No one was bothered about it until the flood waters started entering houses and other buildings, instead of flowing through the canals. “Let’s accept the reality. Organic waste management has been a failure in our State, whichever the municipality. Torrential rains and the nature of the garbage makes it prone to leaking, rendering it difficult to process. Just like toilet waste, organic waste has to be treated at source, by each individual house or apartment — it is up to them, they should also ensure that the local municipality or panchayat takes away the segregated plastic waste. We have the technology for it and can’t afford any more delays in implementation. Canals and water bodies need to be cleaned up before the next floods,” says Neelakandan.

While many in the State have been advocating and even experimenting with houses built on concrete stilts foreseeing future floods, such construction requires a lot of research and study, according to Muralee Thummarukudy, internationally renowned expert in disaster response. Earthquake possibilities and the density of the soil need to be taken into account and lightweight materials used for construction, he opines. Meanwhile, Neelakandan feels that it’s time we did away with the ubiquitous boundary walls, which not only crumbles with each flood but also obstruct rescue operations and the smooth
movement of boats.

“All we need are fences, like in the west. And above all, all these measures should become part of our lives, not a passing fad,” the environmentalist adds. “Changes won’t happen overnight but they will eventually. Everyone should be an environmentalist, and make sure no illegal constructions or activities harming the environment occur in his or her vicinity. The government on their part should guide the people, not dance to their tunes for votes,” he sums up.