THERE’S NO BANGALORE WITHOUT ITS DARSHINIS

AS ANUBHUTI KRISHNA DISCOVERS, AS SHE UNFURLS THE LOVE STORY OF THE GARDEN CITY AND ITS TRADITIONAL ‘FAST FOOD’ JOINTS 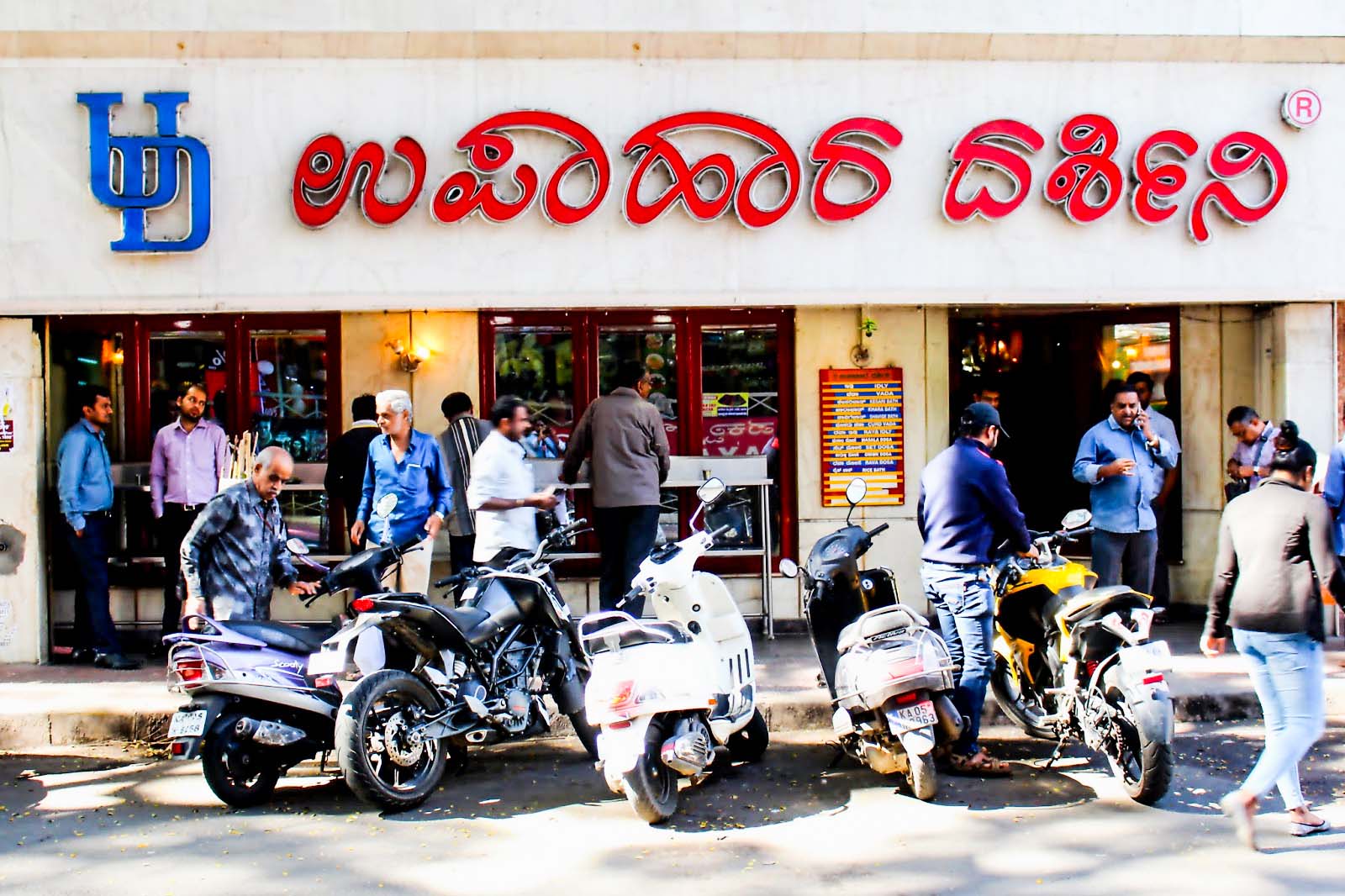 It is 7:30 in the morning and the queue at Krishna Bhavan runs long. The kitchen is busy and the dining area is full. Smoke wafts from the large iron griddle churning out dosas at the back; steam clouds the sambar cauldron in the corner. Some people walk around balancing plates of piping hot idlis and bowls of sambar, some ferry crisp dosas and soft chow-chow baath to their spots, yet others wait for their parcels, small and big, which they will carry home. Many more queue at the cash counter for the tokens.

Not very far, at Udupi Sagar, the scene is not very different. While there is no one waiting outside, people still queue: first for tokens, then for the food. A classic portrait of the founder hangs at the cash counter; the cashier counts notes and hands out tokens. Basic yet clean steel tables are abuzz with activity. Idli, dosa, bajji, rice baath, coffee — the variety of food on offer is mind-boggling, the prices logic defying.

These scenes repeat every morning, afternoon, and evening all 365days of the year.

Bangalore may be known worldwide for its microbreweries, hip cafés and up-market restaurants, but nothing defines the garden city like its old-world darshinis and tiffin centers. At a time when the city is exploding with culinary options, these humble eateries continue to thrive and feed
thousands everyday.

Call them canteens or lunch homes, tiffin centers or cafés, the darshinis that dole out some of the most soul-satisfying grub also run Bangalore. What began in the 70s, when someone identified the need to have F&B options for the working class, is now a phenomenon that has every Bangalorean eating out of their hands, literally. The darshinis started as hole-in-the-wall coffee and idli places for newspaper hawkers, milk vendors, drivers and shopkeepers, but were soon so popular that every passer-by would stop for a quick cup of coffee and some snack. They slowly started mushrooming everywhere and slowly, yet steadily, transformed from being just coffee counters to full-fledged kitchens and dining halls.

“The boom of the darshinis in Bangalore coincided with the establishment of Bangalore as an employment hub,” informs Kalyan Gopalakrishnan, a restaurateur who grew up in Bangalore and witnessed the rise of the darshini culture. “As people started to stream into the city for work, darshinis started to open up too.” They, says Kalyan, provided clean, nutritious and fresh food and were quick and economical. “In that sense they were much like your western QSRs, only local.” Run mostly by families from Udupi, they borrowed the name ‘darshini’ from Upahaara Darshini, Bangalore’s first such place, which had opened at Basavanagudi in 1989. By the early 90s, the city was inundated with them.

The concept of a darshini is simple. You walk in; pay for what you want at the cash counter and pick up your food at the kitchen counter. You can choose to eat here — there are tables, counters, drinking water, and clean cutlery — or parcel. The menu is basic yet extensive: idlis, dosas, chow-chow baath and vada in the morning, meals in the afternoon; bondas, bajjis, and coffee in the evening. Everything is wholesome and fulfilling and within the
common-man’s budget.

And so, darshinis soon became the primary source of nourishment for the city and its people. They were no longer only for workers or bachelors, but served as family spaces too: uncles in dhotis catching up over coffee, aunties in cotton sarees gorging on dosas, and students in uniforms hanging out for Gobi Manchurian after college was routine — sharing tables with strangers was common. The spaces were democratic too — a worker could eat next to a businessman, a bus driver could sit next to a millionaire, a college student can wait behind a daily wager. At a darshini no one was, or still is, bigger than the food.

“Eating out was not a big thing back in the 80s,” says, Sharath Krishnamurthy, a Bangalore resident, who remembers having only a handful of places that were frequented by families. “Back in the day, people were very careful about what they ate and where.” At a darshini, he says, one was assured of clean and fresh food made by experienced hands. “The food always tasted the same, and overtime these places became just like home.” In that sense little has changed in the past 30years. Darshinis remain the primary mode of nourishment; they also serve as places of communal dining and socializing. Workers, bachelors, students, survive on their predictable food; families continue to patronize them. In a city where new restaurants open (and shut) everyday, they continue to make more money than
5-star restaurants.

“The logic is simple,” explains Kalyan. “When you eat at a darshini, you get quality food which appeals to your palate as well as pocket.” In the long term, the economics, he says, matter the most. Eating at a darshini remains convenient and cost effective: you do not have to travel far from work or home, there is always a darshini close by, and, you can still eat a nice meal for less than a hundred rupees. Their adapting to the times also remains a large factor of their longevity. With the introduction of North Indian meals, noodles, fried rice, roti-curries, and innovative snacks like the now legendary Gobi Manchurian, most of them cater not only to the classical South Indian palate but also to the immigrant population
and the youth.

“If you have lived in Bangalore, you have a connect with the darshinis,” says Sharath, “and many of us go back for the experience that was an essential part of growing up here.” There is one more group that visits the darshinis regularly though: those who came to Bangalore from all over the country and were fed by the humble eateries in the early days. “I still remember my first day in Bangalore,” remembers Debashish Kar, “the first place I had visited was the darshini close to my new home. The fresh, flavourful food there had, in a way, inducted me to the city.” It has been a decade since and to him, says Kar, Bangalore still means dosa and coffee at Krishna Bhavan. We are sure he is not alone.